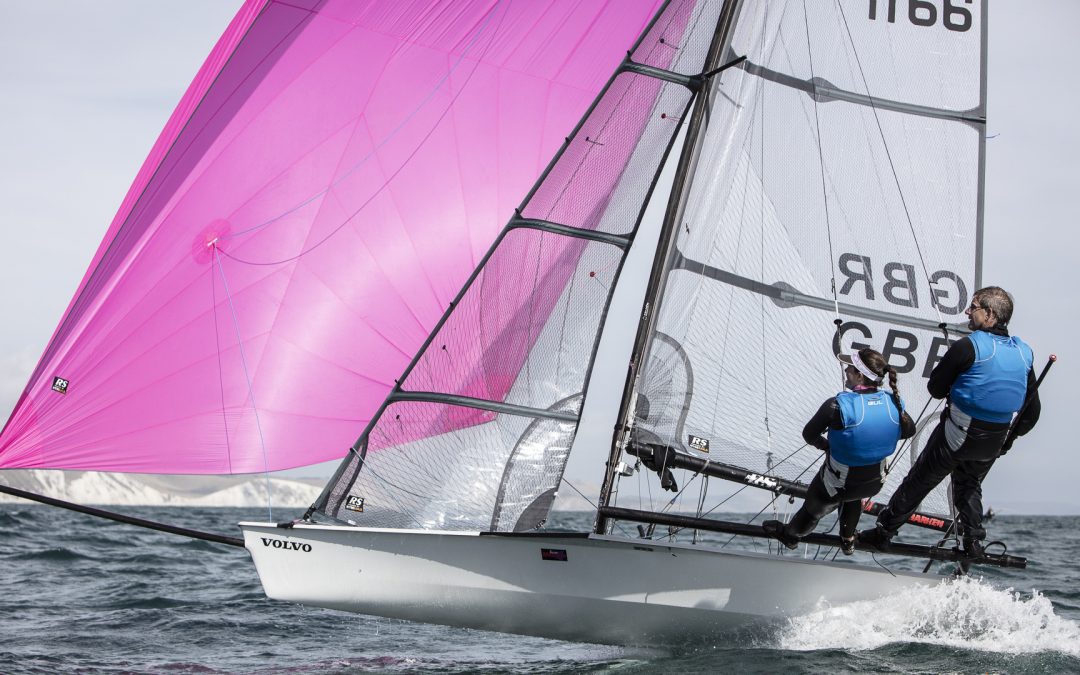 As the RS800 marks the 20th anniversary of its first championship this year, leading class sailor Luke McEwen takes a look at the team that developed the boat from its initial conception to making it the most accessible modern day twin wire skiff. Since its launch in 1999, the class has evolved to keep with the times.

What’s special about the RS800?

The RS800 is an exhilarating boat to sail; a very fast twin wire skiff with PY of only 799 but controllable enough for amateur sailors to handle in any normal dinghy sailing conditions.  With strict one design and 100% weight equalisation, the racing is very fair and there’s no cheque-book route to the front of the fleet. Last year’s Nationals was won by a 9 year old boat and the boat in 3rd was 17 years old, so despite their light weight the epoxy hulls and carbon rigs are proven to last.

The friendly amateur class has great socials on the racing circuit, helped by the boats being simply rigged – there’s not too much to bimble in the dinghy park, which leaves more time for sailing and partying. This is at the heart of the RS philosophy and drove many of the design decisions that gave the 800 its unique character.

The boat was designed by Phil Morrison, who was at that time one of the leading designers of International 14s and several one design classes.  Phil worked closely with Nick Peters and the rest of the RS team, supported by their suppliers of sails and spars.

This was RS’s first foray into high performance skiff design.  The background at the time was the excitement of 4000s, 5000s and 14s – the first generation of popular asymmetric skiffs, which had taken the dinghy world by storm.

RS wanted to create a boat which offered normal sailors the exhilaration of twin wire skiff sailing without needing to be sailed by two big blokes covered in bruises.  Phil Morrison’s concept was a long hull that would plane easily, driven by a relatively small rig.  This was in stark contrast to the Laser 5000 and Topper’s Boss, which were relatively big, heavy boats with big sails.

The design team had different opinions on what the boat should look like and how far to push the boundaries, so they built two quite different prototypes to prove out their ideas.  The first was an extreme design, with a rotating carbon wing mast and narrow bow.  By all accounts it was pretty difficult to sail, not really in line with the idea of making an accessible and forgiving skiff.

The second prototype became the RS800 we know today: still fast but easier to sail.  It had a more conventional rig: a non-rotating carbon mast with twin spreaders and an almost-masthead asymmetric spinnaker.   The mainsail was, in contrast to the trend at the time, only fully battened at the top.  This made it more controllable at low speed and in gybes without losing the advantages of a powerful leech profile.

One of the obvious differences from the prototype compared to the modern boat is the helm is hiking not trapezing and the boat has trampolines to sit on. The single wiring option was offered to broaden the appeal of the boat to club racers and maximise the number of people who could sail it. This did help lots of people get into the class: 17 boats came to the first Nationals in 1999, rising to 65 after just 2 years.

Weight equalisation was used to make single wiring competitive with twin wiring.  The boat can carry up to 15kg of corrector weights and the racks are variable in width to increase the righting moment for the lighter teams.  The sailors weigh in before each regatta, then their boat settings are fixed for the duration of the event.  This was a welcome change for the sailors coming from the Laser 4000 and 5000 classes who had to weigh in after racing, risking disqualification if their settings were wrong.

Some of the 800 sailors resented the compromises of the single wire option with its ungainly trampolines.  Also the need to balance righting moments across such a wide range from light people on single wire to heavier sailors twin wiring meant that only 33% weight equalisation was practical.

On the circuit most people were twin wiring, so in 2003 the class voted to switch to twin wire only, getting rid of the single wire option and the trampolines.  This allowed 100% weight equalisation, giving the teams a truly level playing field.  It proved a popular move; in 2004 there were 70 boats at the nationals.

After the 2004 Olympics, second hand 49ers were going cheap and were becoming popular with amateur skiff racers who wanted a more “standing up” boat.  The big kick bars on the cockpit floor of the 800 were originally designed for the hiking option, and although they also made it easier for people learning to trapeze, the perception was that a thoroughbred skiff should offer an uncluttered cockpit to walk across.

So in 2007 the deck was redesigned with a flatter, more open cockpit, narrower gunwales and no kick bars.  This was the first time RS had structurally altered a one-design boat, and it was controversial.  But they made sure that the weight saving from the reduced deck surface area was put back in as reinforcement to strengthen the boat.  The hull was exactly the same, from the same mould.   So there was no performance advantage to the new deck, just a more modern look.

The final change instigated by RS was a square top mainsail, in 2013.  The technical team at RS felt that the original “pin-head” sail was dated compared to what was now being sported on development classes like the International 14.  The class was consulted at the 2012 AGM and said they wanted the new sail to be as much as possible the same performance but to be “never slower”.  The last thing anyone wanted was a scramble to buy up old sails for the odd conditions when they would give an advantage.

RS managed this very well and although the original “pin head” sails have since won a couple of races at championship level, after a season or two the leading sailors learned to get the best out of the square top, giving it a marginal speed advantage through most of the wind range.  The more powerful head of the sail requires a little more tension in the upper shrouds to control the topmast, but otherwise boat setup has remained similar.

The other smart thing RS did at the same time was to change the colour of the threads in the cloth from Kevlar yellow to Carbon black and add an Olympic-style national flag, making the new sailplan look even more exciting.

The last rule change came in 2017, instigated by the then class chairman Chris Feibusch.  Chris had been taking people out for demo sails and noticed how many ex-29er sailors said they loved the boat but wanted the crew to be able to play the mainsheet upwind.

From the beginning, the class had a rule that the boat had to be sailed in the traditional style with the helm sheeting the main.  The perception had always been that crew sheeting would be faster but would favour big strong crews and teams who sailed all the time together, at the expense of smaller crews or scratch teams, making the class less accessible.

Chris was keen to find a way to let the new generation of crews take the mainsheet if they wanted to, not least because it would also help smaller female helms who sometimes struggled with the mainsheet loads.  The solution was to allow crew sheeting from the boom as an option but to limit the advantage of a big crew, by giving the mainsheet a 3:1 purchase at the stern.  This keeps the loads very light, and means the crew sheeting in the main in a lull doesn’t have a huge speed advantage over a helm doing the same with the original centre boom sheeting system which has less purchase.  You need to be fit to be a crew, as ever, but not particularly strong.

Keeping with the theme of staying at the forefront of modern racing, the class decided that it was the right time to allow the crew to take the mainsheet, and the new rules came into force in 2017.  Helm sheeting from the floor is still an option and after two years about half the teams still sail this way. The Nationals have been won by crew sheeters for the last two years but the European championships and most of the open meetings have gone to helm sheeters, so the performance does seem to be pretty equal.

The crew sheeting option has attracted a new generation of 800 sailors and has allowed more female helms to join the class.  It also makes learning to helm from the wire easier as you only need to do two things at once instead of three!

As the class hits its 20th anniversary, RS800 sailors have a full year of celebrations to enjoy:

Whilst RS have reported a bumper year of new boat sales, and good second hand boats are selling fast, there is also a growing band of enthusiasts buying up much older 800s and refurbishing them. With over 440 RS800s built in the last 20 years there are plenty of boats and frequent exchanges on Facebook to source missing bits of kit. In recognition of these efforts, Spinlock have offered the ‘1999’ prize for the first boat in the Reunion Regatta with the original deck and pin-head mainsail.

So get yourself an RS800, old or new, and come and join in what promises to be a fantastic year in the class.