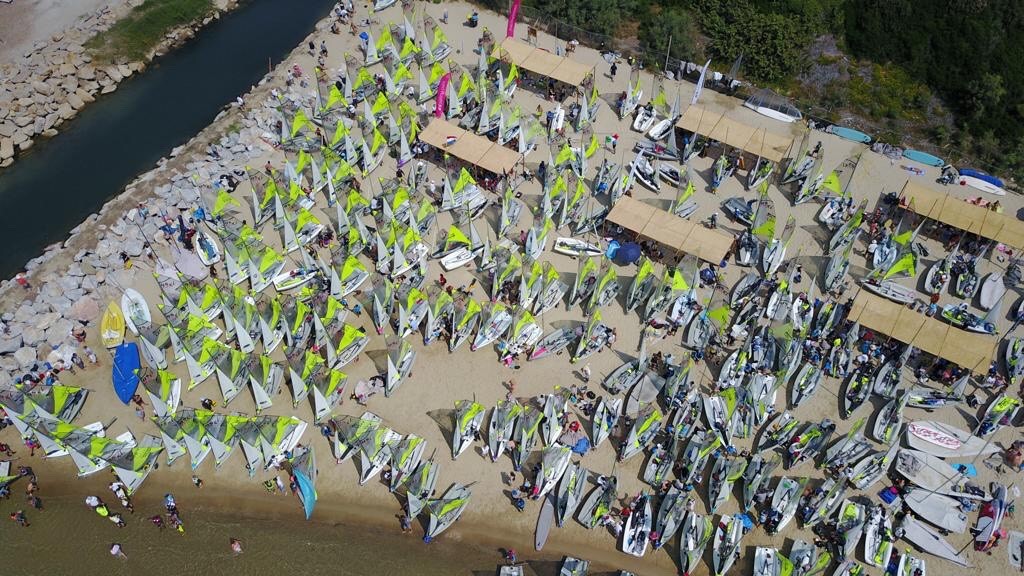 The RS Feva Class have been achingly close to reaching a 200 boat fleet at their European and World Championships in recent years but they have never quite made it. Follonica, Tuscany, has welcomed a whopping 400 RS Feva sailors to the sunny coastline of Italy. The entry list hit 200 on the final day of registration as younger siblings begged their parents to crew for them and compete alongside their friends!

The RS Feva class has grown all over the world. A record-breaking, 23 nations have entered and for the first time this year, a team from Japan are attending the World Championships. Not only do we have more nations than ever, we also have the best sailors from these nations attending. The National Champions from Great Britain, New Zealand, Czech Republic and more are here ready to race! The current Europeans Champions from France, Lisandru Bunel and Thomas Kuntze, and the current Ladies European and Junior Champions from Malta, Vanja Ramm-Ericson and Maia Delin are also here looking for another RS Feva title. With all these impressive sailors on one racecourse, its set to be an exciting week of very competitive racing and it’s all to play for! Great Britain has the largest number of sailors competing, closely followed by the local sailors from Italy. Who will be crowned the 2019 RS Feva World Champion?

So how did this event attract so many entries? The Gruppo Vela de Follonica sailing area is stunning and the conditions are perfect, with a sea breeze building throughout the morning and beautiful sunshine! The event has brought an incredible atmosphere to the Tuscan coastline, with 400 sailors and their families excited for a week of awesome racing. The fun doesn’t stop once the sailors are off the water, the RS Feva sailors have after sailing pasta to enjoy together followed by beach games until the sun sets!

The first RS Feva World Championships were held at Lake Garda in 2006 with 57 entries and just 6 nations, it is undeniable that this class has come along way. A special mention must go to Lucy Jameson, the Class Secretary who has worked tirelessly to build the fleet to a whopping 200 boats. With continued support from RS Sailing, the International RS Feva classes dedication has allowed this junior fleet to go from strength to strength and continue to develop as the world’s leading double-handed youth dinghy class.

Good luck to all the sailors competing! Click here to follow all the fun and racing at the RS Feva World Championships!