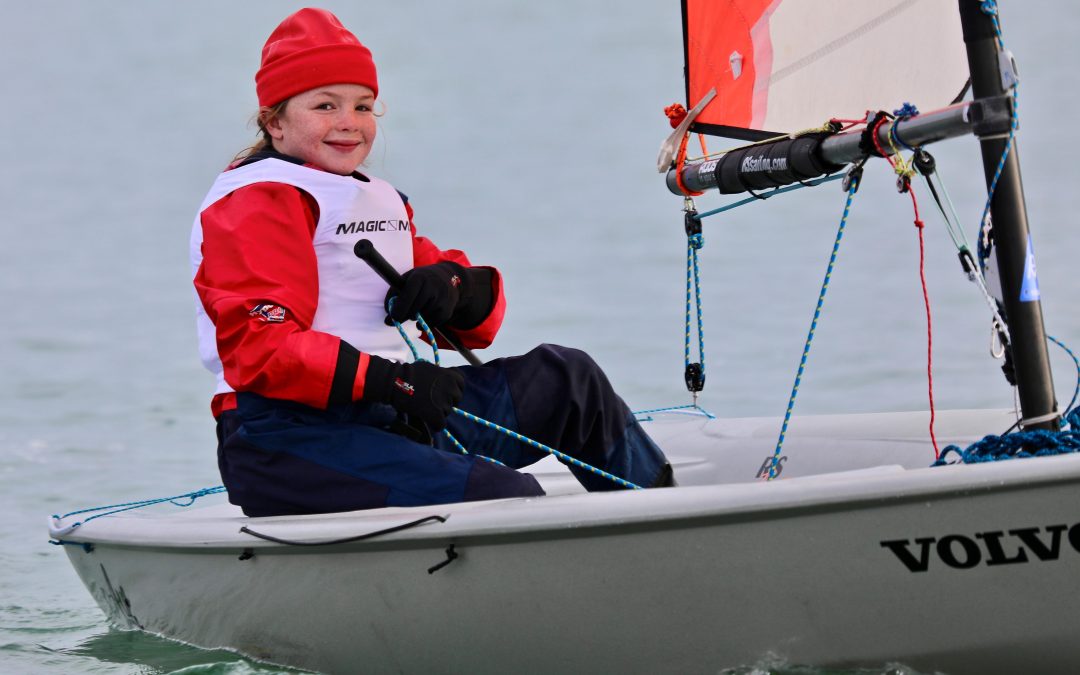 Head of the World Sailing Trust, Dee Cafferi, commented “If we want our sport to progress and move forwards then we need to consider 50% of the population, otherwise we are going to be left behind. This is for all of us to take forwards into the future with a collaborative and cohesive approach to make the sport stronger.”

On International Women’s Day, Two Harbour Squad want to celebrate some of the awesome women and girls in the RS Tera community. From feisty sailors and coaches, to the females involved in ‘behind the scenes’ support.

Two Harbour Squad is run from Emsworth Sailing Club, with support from Emsworth Slipper and Felpham Sailing Clubs. It started last year with the aim to provide an opportunity for RS Tera sailors to hone racing skills during winter months. Alongside coaching, there is a big emphasis placed on the social aspect of racing, so important if young people are to keep sailing into late teens and beyond. The squad was set up by parents Pegs and Jono Field. Despite establishing the coaching so their son had access to training, they believed gender balance of participants and coaches was important. As Pegs commented “Focussing on gender has brought so much to the ethos of the squad. Our kids train together and develop mutual respect. There is no banter about girls not being good at racing. With many of our talented coaches being female, it is just accepted that this is a sport where everyone participates equally.”

One of the youngest squad members is Libby, from Lancing Sailing Club, who started sailing age four. With older brother Callum having done the squad the previous winter, Libby was desperate to join in. Her persistence finally paid off and she started training this year. The first challenge Libby faced was deciding on the name for her boat. Thankfully, over breakfast, her favourite chocolate spread provided inspiration and ‘Nutera’ was named. Libby’s passion for racing is clearly evident, jostling on start lines for a good position when many older and more experienced sailors often hold back. Head coach, Vikki, said “It is awesome to see our youngest sailor, Libby, putting the hard work in over this winter. She is incredibly determined to improve and her progress over the past few months has been inspiring!”

Felpham Sailing Club member Josie, has had her RS Tera just over a year. Initially she didn’t think racing was for her until she did a youth race course. Having caught the bug she was over the moon to join Two Harbour. She has now progressed from sport rig to Pro sail, as well as being accepted onto the National RS Tera Pro squad. “Sailing is fantastic, it is unpredictable and teaches you to act there and then. It gives you confidence, freedom and fun”. Josie has loved her time racing the RS Tera, “It is a great starter boat and the class is so welcoming”. With her sights set on the RS Tera Southern Travellers Series, she also dreams of an Olympic medal. But whatever happens, says “In the future I want to become a coach and give back to my sport like my Emsworth coach Vikki”.

Another sailor returning to the squad this time is Georgie from Emsworth Sailing Club. Last year her determination caught the eye of the coaches and she was awarded the Endeavour Award. All the more impressive considering it was her first year sailing a RS Tera. Georgie’s passion for sailing started early on. She loves the freedom a RS Tera gives, as she can right her dinghy easily during a capsize and continue to race. Georgie enjoys sailing with friends and having fun, but above everything, relishes the racing. “I love hiking and want to be really competitive on the water”. Her goal is to compete in more races and do as much as she can. Georgie also has ambitions further afield – “I really want to do a race that means I get to race around the British Isles, although maybe not in my Tera!”