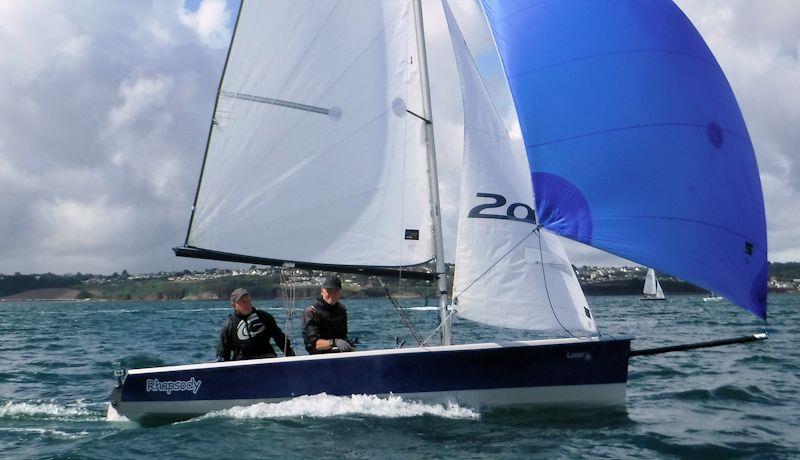 By the 2000 Class Association (Mark Foley)

A Covid boat park is a funny place; maybe we’ll get used to it by Friday. Masks were worn until on the water. It’s strange not seeing the smiles on faces of 2000 sailors at a Nationals. It’s not a medical opinion, but frankly some masks didn’t fit in a very flattering fashion, which makes me conclude some people have the wrong ears.

30 boats are a decent turn out in the circumstances. Some regulars were put off by C-19; others leapt at the opportunities afforded by not being able to go abroad and “working from home” to make their first Nationals appearance.

Torquay was in view on Sunday morning, being visible though shrouded in mist, on Saturday it couldn’t be seen at all. The wind was easterly or south easterly. The opinion that if it’s coming from the east it will not be shifty needs to be regarded with some suspicion. The breeze was light throughout; not enough for both to be on the gunwale much of the time.

Which was true on the first beat but not thereafter shifting southerly to 120 ish.

It took a while to get going, plenty of boats wanting to push the line at the pin end. After the first general recall the U flag went up after the second recall black flag was applied and one over eager helm was over.

It didn’t appear to be a favoured side; quite a few boats you’d expect in the top ten appeared mid-fleet at the end of lap 1 and although some made progress through the fleet there was still a levelling up at the finish.

Rob & Sarah Burridge made the most of it taking first with Iain & Sarah Yardley an excellent 2nd and 2000 newcomers Isaac & Fresh (I didn’t make that up) 3rd.

Similar conditions forecast for Monday, breezier later in the week.

The misty miasma of Sunday drizzle had evaporated into a bright sunny morning at Brixham revealing a flat sea with the ferris wheel by Torquay Marina discernible across the bay.

The weather had revolved to the west; no wind could be felt in the shelter of the harbour, and not much by the committee boat at sea so postponement was flagged until late morning. By the time the fleet assembled at the start a very nice breeze was building requiring all bottoms on the gunwales.

The direction was south westerly, so the course was set sailing into the bay on a pretty flat sea. Mouth-watering.

The pin end tempted the hot shots and the crush there resulted in a general recall; you get the idea. U was raised, but that didn’t temper temptation. Recall 2. Black flag followed and five transgressors had to wait out the race which started at the fourth attempt.

The southern side of the course seemed favoured and on the flat sea the fleet was soon quite well spread out. Considering the wind was blowing off the land it didn’t seem that shifty. But there were some rogue waves coming through, the source of which wasn’t obvious.

It was hard fought at the front, Fresh & Isaac got away into first and Kevin & Gemma had a battle with Paul & Georgia to settle second and third the latter duo taking second.

After very little sailing during 2020 Helen & Andrew Phillips took an excellent fifth after revisiting their rig set up overnight.

Numbers 2458, 22642, 22612, 2615 and 21405 re-joined the fleet from the naughty step and – would you believe it? – race 4 started first time. This seemed to be a very well set up course with no line bias at all, those who could get onto port and weave their way across the fleet early seemed to prosper, and left-handers appeared to suffer.

Can’t say much more about this one from our disadvantage point well down the fleet we didn’t see a lot. Paul and Georgia took first, Rob & Sarah second, Simon & Katie third.

It’s remarkable that the four races have each had a different winning team. The top places are now separated by just one point so all is to play for. Maybe the postponement this morning gave the usual shore side opportunity for the sharing of tops tips?

A confident race officer, the excellent Sean Semmens of BYC expected a stronger breeze than Monday. So assured, the fleet set sail driftily across the millpond of the bay.

Half way to Torquay, after encounters with a ferry and a trawler, and a spookily rainbow-free sunny drenching, the shore side boats took off as the wind came in from the south west. Sean aspired to three races on Tuesday as Thursday and Friday looked extremely “fresh to frightening”, so from there on there was no hanging around.

The course was set at 225 degrees. The pin end was crowded but no one was over the line. The breeze was stronger than Monday in the low teens MPH, and the judgment to tack across the fleet onto port is a bit shaky after lockdown. Those who did it well prospered. Rob & Sarah Burridge most notably. Approaching the windward mark the wind became shifty, as you would expect as you approach the land, and those calling their shifts and tacking promptly gained well. The wind was constant throughout the race, and the Burridges came out on top, with Paul & Georgia and Simon & Katie taking second and third.

The breeze was noticeably stronger, but the direction consistent on 225. The boats that held the left hand side of the beat longer, and sail consistently flat, appeared to gain substantially on the first lap. Again it was Rob Paul and Simon who were making the most of it. However they didn’t get away from the fleet and the upwind mark was still an unusually crowded place even on the third lap.

Coming downwind the leaders went right, but those gybing away early then back onto starboard didn’t do too badly by avoiding the blanket behind them. As for the result, see above: Burridges came out on top, with Paul & Georgia and Simon & Katie taking second and third.

The flag was raised indicating a third race; after two races already that had been pretty hard work, perhaps the whole fleet wasn’t delighted by this extra play time. The breeze was stronger still, in the gusts possibly 20 mph+ and becoming stronger, so it was going to tell on Wednesday morning! The start was briskly done, but Simon and Katie were OCS and had to go back.

It was tough going to keep the boat flat going upwind, and at least one boat went upside down, but it was fun coming down wind! Good to see those hulls coming out of the water and some fast but fair overtaking.

At the downwind gate at the end of the first lap there was a curious kazoo-like noise and flag that indicated a new upwind mark had been set; the wind had backed by about 40 degrees. I didn’t hear of anyone who didn’t spot this (eventually) but if there’s a random result this might explain it.

Incredibly Simon and Katie sailed through the fleet to come out sixth. Rob & Sarah Burridge completed a great day at the office with another single point, and Paul & Georgia maintained their excellent championship in second.

It evidently suited Ed Dodwell and his son Ruben who finished an amazing third place and Johnny Sargent helming for his old man Matt who came in fourth. There are some top prospects in the 2000s.

Storm Ellen may have curtailed this Championship with Rob and Sarah the 2020 Champions, we’ll see if any race can be put on for Thursday morning when there may be a lull. Meantime the sailors will enjoy a Wednesday rest.

No covid-safe sailing has been possible yesterday or today due to Storm Ellen.

Under normal circumstances sailing might have been run yesterday (Thursday) for the more experienced elements of the fleet, however due to the revised risk assessments policy that the Class Association and Brixham YC (under RYA guidance) adopted in view of Covid-19, the upper wind speed limit was lower, and was exceeded yesterday. On Friday the usual 25 MPH limit would have been blown away by Ellen.

Check out the overall results – https://www.sail-world.com/news/230962/Astral-Azure-2000-Class-Nationals-overall