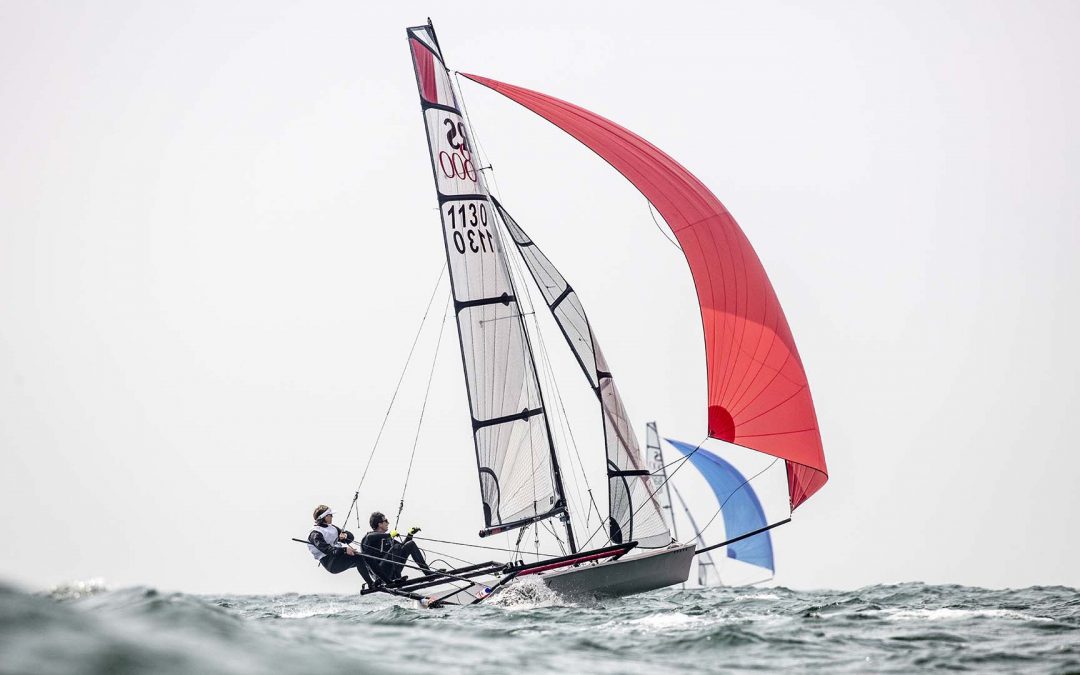 Rain, rain and more rain. That was the most obvious feature of the weekend, but just to say it was very rainy would be firstly an understatement and secondly to overlook the enthusiasm of the 19 RS800s who still decided it was worth going to Farmoor despite the forecast and the lack of any social. Not to mention even more importantly the incredible generosity of the volunteers at Oxford Sailing Club who sat out in the committee boat and safety RIBs all weekend getting soaking wet just to give us what turned out to be really excellent racing.

Saturday ranged from perfect twin wiring conditions (apart from the rain of course) to flat calm, and plenty of snakes and ladders as the shifty Southerly wind strongly favoured first the West and then the East side of the course.

Taking an early lead in the first race, Phil Walker and John Mather decided to round the finish mark instead of the first leeward mark. Luckily the recently crowned national champion Tom Morris (this time sailing with Tristan Jacques) was in second, saw his opportunity and rounded the correct mark but to starboard instead of port. The following pack, clearly in awe of Tom’s encyclopaedic knowledge of all things RS800 (check out his Youtube channel) dutifully followed suit. Luke and Emma McEwen, languishing some way down the fleet, were the first boat to have read the sailing instructions, so rounded to port, dodging the boats going the wrong way round the mark. This gave them a lead which they held for the rest of the five (yes five) lap race, hotly pursued by Rob Gullan and Dicken Maclean.

Race two was a match race between Rob and Dicken, and Phil and John, the rest of us following respectfully some way behind.

Tom and Tristan found their mojo in the third race, building up a lead of almost half a leg before the wind died on the final run. When it filled back in from the North-West, Luke and Emma took advantage to win, with Phil and John behind. Tom and Tristan managed to salvage third, but the PRO decided after finishing the fleet that the race should be abandoned.

So the real race three was on Sunday morning, which dawned – yes you guessed – very rainy. And it was blowing dogs off chains so there was much standing around in the lee of the clubhouse (the previously popular gazebo had blown down) deciding whether RS800 racing in 25+ knots was a good idea. Generally not was the consensus, at least not when it’s raining that hard.

The race team were however more committed than the sailors so off they went with their buoys and flags and some of us were bold enough to follow them, while the sensible ones bought a coffee and watched from the safety of the shore. Hugh Shone and Fiona Hampshire had a good 15 minutes head start on the reluctant rest of us, which may have given them a crucial advantage of practice, after all this is only the second event of the season and certainly the windiest.

Hugh and Fiona deservedly won the first race, sailing like gods (as far as we could see through the rain). The gusts took a few casualties, most spectacular of which was Grace Fell and Tim Gratton’s monster pitchpole almost on top of the committee boat 30 seconds before the start. Grace heroically finished the race (beating her sister, nothing like sibling rivalry to spur you on) and spent the rest of the day in the warm dry clubhouse with an ice pack on her ankle.

Despite a gradual drop in the wind, all three of Sunday’s races followed a similar pattern of results with the top four battling tightly and changing places on almost every leg in significant wind shifts with big holes in the breeze. The more experienced sailors at the front of the fleet generally dropped their kites to cross the finish line, noting that the ODM was only a couple of boat lengths from the solid concrete wall of the reservoir. More gung-ho youngsters held their kites across the line, clearly relishing the challenge of a kite drop under pressure.

In the end Rob and Dicken managed consistent results to take the coveted RS800 Inlands silver platter, while Hugh and Fiona chased them hard with two race wins in the breeze. Luke and Emma had a good tussle with Tom and Tristan, just gaining a one-point advantage on the final lap of the last race. Fifth and sixth places went to Claire Lasko and Ed Dyer, and Leo Wilkinson and Toby Bloomfield, both teams competing in their first RS800 season together. Clearly ones to watch for next year – and it was great to see so many other new faces in the fleet.

Sadly (but perhaps mercifully given the lack of hot showers) this was the last RS800 circuit event of the year. Thanks go to Oxford SC for hosting our Inlands at short notice and to Rooster, sponsors of the 2020 RS800 UK Tour, who provided very useful dry bags as prizes.

Check out the results in full on the RS800 Class Association website.