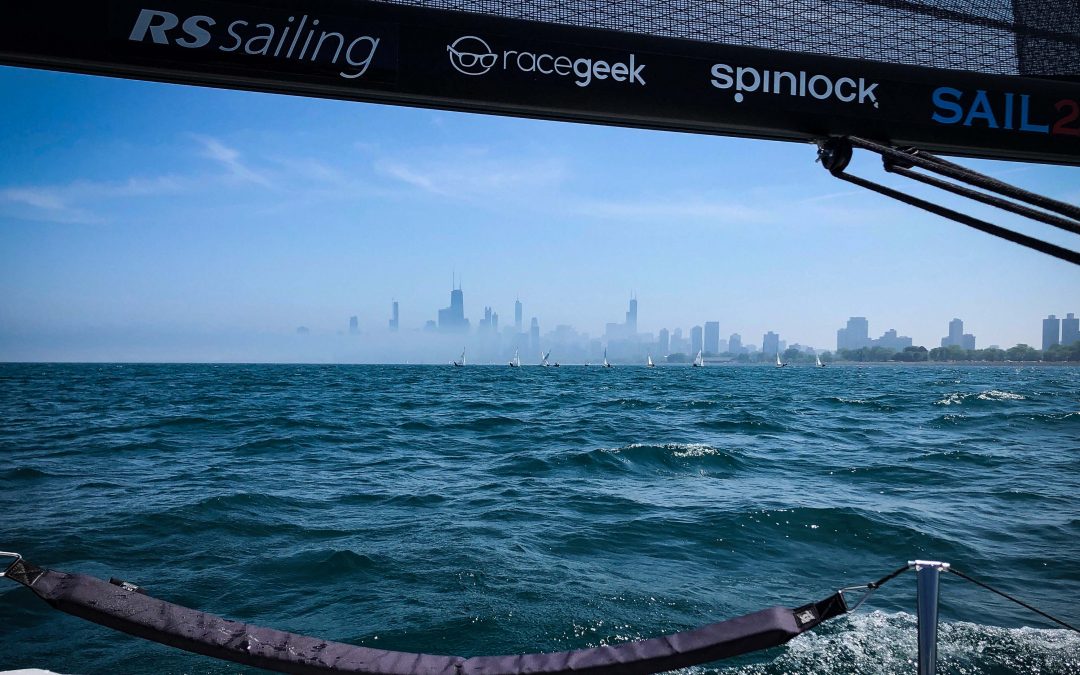 Even the fog couldn’t hide the buzz around the RS21 fleet this weekend at the Chicago NOOD Regatta. With two missed days of racing plagued by fog, it was all to play for on Saturday in champagne sailing conditions.

As the sailors headed out to the start area in 10knots of breeze on Friday morning, there was the familiar crackle of excitement and expectations in the air. A thin layer of fog hung over Lake Michigan until it finally engulfed the sailing areas, with visibility dropping below 50ft Chicago Yacht Club race committee were forced to postponed racing for the day.

Following a day stuck on shore, the teams were desperate to head out into the spectacular 12 knots and sunshine on Saturday morning. In addition to the champagne sailing conditions, it was the first opportunity to see the Chicago skyline in all its glory, now that the fog had cleared.

Race 1 was a punchy start to proceedings with Ed Fury port tacking the fleet. His luck sadly switched back up the first beat with a port and starboard incident with a cruising boat. Jody Lutz from North Sails led from the top mark, followed closely behind by the Japanese Youth Team helmed by Atsushi Nishizaka. The Japanese Youth Team had revelled in the opportunity to fly in and practice in the RS21 ahead of the International University Regatta. Lutz went on to win the race but Fury had a great final downwind leg to pip Nishizaka on the finish line.

Race 2 got underway in lighter conditions as the wind tracked left. Nishizaka trucked off well upwind and took the early lead around the top mark, they continued to sail very well to consolidate their lead and won the race. Lutz was second place followed closely by Fury.

Race 3 started in light breeze again, 8 knots in the puffs meant that the teams work working hard to look for pressure across the course. This race opened up to a new leader in the fleet with Kurt Korte, they were closely followed by Nishizaka, switching positions downwind several times.

The pressure freshened up for race 4 and Lutz got out of the starting gate well. Lutz lead from the top mark, followed by the resurgence of Korte, the racing was tight with all the sailors leaving the windward mark within a few boat lengths. Lutz got a break and won the race followed by Korte and then Nishizaka.

It was a long day of great tactical racing on the water and the race committee worked hard to make up the races after no racing on Friday.

Sunday started off by looking promising as the teams arrived down at the dock, however the forecast did look bleak.

All classes at the NOOD Regatta headed out to the racecourse in a dying breeze. As the fleet got to the starting area the wind shut off completely, so the sailors bobbed around and waited patiently. After some time the wind filled in in from the North which brought rain, nice!

Race 5 got away in 12 knots of breeze, the Japanese Team capitalized on their great start and rounded the top mark in first. They were followed around the mark by Lutz and Fury but within moments of rounding the wind died again and the fog rolled in once more. With no other option available to the race committee, racing was abandoned for the day.

The RS21s next stop takes them to Boston Yacht Club from July 25 – 28 for the Marblehead NOOD Regatta. The highlight of the Boston Yacht Clubs summer schedule, it is pipped to be an awesome event. Order your charter boat now to avoid disappointment! A massive thank you to our partners, Racegeek, Spinlock and Sail22 for making all of this possible.