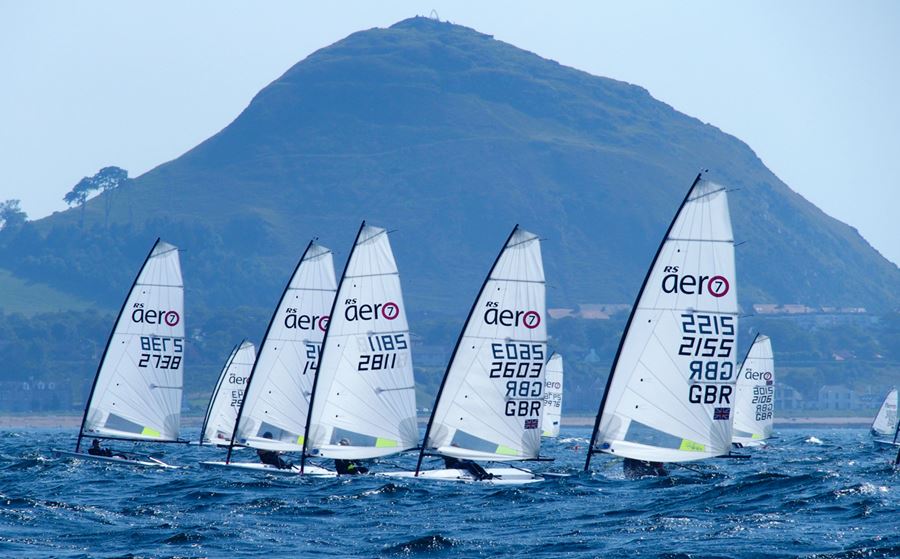 Wow what a week! A Scottish heatwave, a full mix of wind and sea states, a beautiful seaside beach location, a friendly club, Scottish hospitality and intense RS Aero racing taken to all the way to the wire in all three fleets!

The event started on the Wednesday with a warm up day. Pre-event coaching in the morning on the green allowed those new to the RS Aero, whether charterers, borrowers or new owners to quickly gain some of the technique and specifics learned in the RS Aero over the past five years.

The ‘RS Aero Challenge Cup’ followed in the afternoon. This is an ‘all RS Aeros’ race with the whole fleet starting together on a PY basis. Three RS Aero 9s sailed off into the lead with Greg Bartlett taking line honours from Ben Charnley and Ffinlo Wright. A bubble of RS Aero 7s followed with Richard Pye holding a slender lead from Peter Barton, Craig Williamson and Tim Hire all hot on his tail.

Ultimately the 7s prevailed after corrected PY with Richard taking the win and a bottle of NB Gin from Peter, with William Caiger in his RS Aero 5 taking 3rd. Tim Hire was 4th with Greg Bartlett 5th. Sixty RS Aeros finished the race held in medium winds with a good mix of each rig spread through the fleet.

Exciting conditions with winds of up to 20kn from the more exposed east and some big waves on the outer loop provided some excellent surfing down the run!

By the end of the day there were waves upon waves to climb over going upwind. Downwind big gains were to be made by pushing hard around the waves although some balance of playing safe was wise! At the end of a big day and 3 races Liina Kolk (Estonia), Peter Barton (Lymington) and Greg Bartlett (Starcross) each had two wins in their fleets.

Juror, David Battye, was on hand to oversee racing and the fleet had the benefit of his expertise with a pre-racing clinic to explain his processes and guidelines for making rulings on the water, when necessary, with some explanation of the limits of Rule 42.

After a couple of hours chilling on the beachside basking under the hot Scottish sun the fleet launched to the prospect of an increasing breeze. However, it remained patchy with large shifts and the fleet were eventually sent back ashore. Well done to the race team for trying to get a race in – and for not trying so hard that they started a bad one!

Friday night was the legendary Greek Night meal at ELYC with the Class Chairman’s Annual RS Aero Awards presented during the evening to those of either noteworthy high and low achievement for various right and wrong reasons through the season!

The breeze was back in the west with flatter water and softening from medium to light through the day making this a day for the lighter wind specialists. Local boats prospered with Ben Wilcox of East Lothian winning the RS Aero 7s and several new faces near the front of their fleets.

In each fleet the title chase remained wide open going into the final day. The wind started fresh and again softened during the day. The northeasterly produced some exciting surfing waves which were slightly skewed to the wind direction providing an interesting challenge.

In the RS Aero 5s Ned Stattersfield (Wells) held a small lead over Will Caiger (Sevenoaks School) with Liina Kolk (Estonia) close behind. Ultimately Will did enough with a race win to close out the series ahead of Ned and Liina who was 1st Lady. 1st Youth Lady was Lily Barrett in 9th.

The RS Aero 7s had Tim Hire (Lymington) just two points behind Peter Barton (Lymington) with Craig Williamson (Staunton Harold) just another couple of points back. A race win saw Peter extend his lead and a 4th in the Race 7 clinched the title. Craig Williamson won the day with a 3, 1,1 to take 2nd overall on tie break whilst Tim sailed consistently with a string of top 4 results to take 3rd overall and 1st Youth. First Lady was Ellie Craig (Draycote) in 14th and 1st Master was UK Class Chairman Nigel Rolfe (Burghfield) in 12th.

In the RS Aero 9 fleet saw Liam Willis (Lymington), Greg Bartlett (Starcross) and Ben Charnley (Snettisham Beach) all very close going into the final day. After Ben won the first race with Greg 2nd it was all near equal with 2 races to go! Ultimately the title went to Liam with Greg 2nd and Ben in 3rd also top Youth.

The RS Aero 9 had no less then 5 race winners over their 8 race series. However, the RS Aero 5s must have been the friendliest fleet ever taking it in turns for the top spot with an incredible 7 different winners and a different leader after each day! The RS Aero 7s achieved their dubious notoriety with four general recalls in Race 8 as the tide set to carry the fleet over the start. PRO, Jim Sinclair, kept order and with about five RS Aero 7s pulled out on each attempt the fleet eventually got away with just 30 starters as the bad boys and girls sailed home to early showers!

Thanks to the all the event supporters – Rooster and Harken for their generous prize haul allowing daily prizes through the fleet. Airshed and Edinburgh Orthodontics for providing ‘FREE PUDDIN’ ’ at the Class dinner and local Gin producer, NB Gin, for the winners’ bottles! RS Sailing provided a huge fleet of charter RS Aeros allowing international visitors the ability to fly in and enabling local sailors to try out an RS Aero in a championship environment. David Battye’s presence as Juror added great value to the event.

Huge thanks to East Lothian Yacht Club of North Berwick and their small army of volunteers who made us all feel so very welcome and made everything happen like clockwork. Their elite shore team delivering trollies into the water is perhaps the best in the world!

Next up for the RS Aeros is this summer’s big one – The RS Aero Europeans at Malcesine on Lake Garda, Italy! Over 100 RS Aeros are already registered and excitement increases as the trip to the Italian Lakes draws closer!

Keep in touch with Everything Aero via the Class website and Facebook group. Check out the event photos here and find the RS Aero Challenge Cup results here.