RS Quests Around the Island 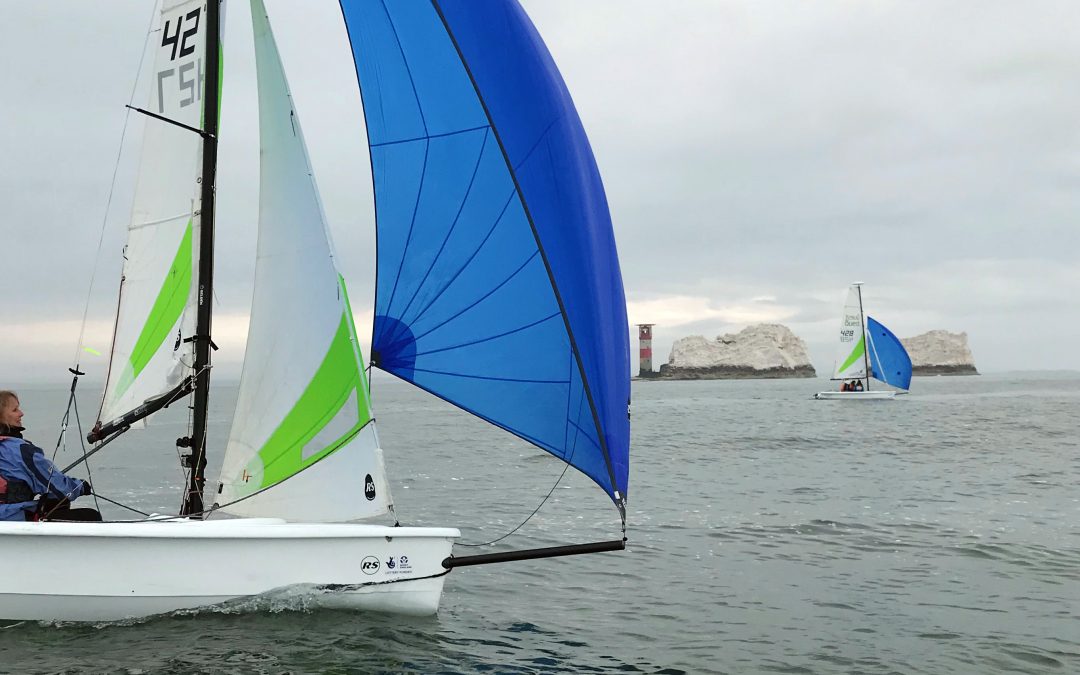 RS Quests Around the Island – by Graeme Bowen

Several months of sharpening sailing skills, careful planning and drumming up sponsors came suddenly into sharp focus at five o’clock on Friday afternoon as the decision, ‘To go,’ was made. Sailing two fourteen-foot sailing dinghies (RS Quests) from Yarmouth, around the Needles, through the over-falls and swirling water off St Catherine’s, across Sandown Bay then back through the boisterous and busy Solent on a Saturday afternoon had been a distant challenge. Now it was sharp reality. The intrepid six who had agreed to raise money for ‘Uzima in Our Hands’ a charity that supports some of the most disadvantaged children on the planet, in rural western Kenya, now had to deliver on their promised deed.

Twelve hours later, in the grey early morning light, the RS Quests, Conquest and Request, were being towed out of Yarmouth Harbour by one of the support vessels. The ‘dressed overall’ flags of the gaffers just stirring in the light breeze indicated that the first leg wouldn’t be too demanding. Onto a buoy, sails up and away on the strong ebb swooshing down to the Needles. Cups of tea and marmalade sandwiches and the rapid progress as first Hurst Narrows then Alum Bay rattled past lifted spirits.  Around the Needles in record time but now ploughing into that ebb that had been so helpful, progress slowed and the haze became a dense fog cutting visibility to a few hundred yards. Clustered around Thursday’s Child (TC) a 34-foot support boat blips on the radar were reassuring that no-one would get lost. Time for porridge and a bacon butties. Ferried from TC to the Quests by the RIB breakfast brought a little cheer to the gloom and lessened the doom-laden boom of the Needles’ fog horn. Gradually, the sun broke through, the tide slackened and turned and a little breeze filled in.  Spinnakers filled. Progress improved. The welcoming white of St Catherine’s lighthouse could be seen against the green of the rising cliff. Through the bobble and chop of the over-falls, on through the swirl of the current around the southern tip of the Island and the boats started to turn North-East. The strong flood tide kicking-in pushed the fleet on to Ventnor. Now the long haul across Sandown Bay.  With the sun shining, the breeze filling, a brief visit from a pod of dolphins and the elevator of two knots of tide, Bembridge lifeboat station was soon in sight.

On past St Helen’s Fort and time for a little more fortification. Sausage casserole as the Quests sailed past Seaview followed-up with chocolate bars hit the spot. Now the afternoon’s sea-breeze filled in and things began to get lively. Ryde, Fishbourne and Norris shot past. The water off Cowes was beginning to cut up rough and things started to get a little damper and little tougher as the crews had to beat for the first time.  Long legs out into the tide and then back toward the Island.  Newtown was soon in sight.  A radio message from the Club about the Prosecco being on ice for their arrival caused a little loss of concentration and the first capsize of the day.  A quick giggle filled recovery and the boat was soon on its way.  A little light spume and white horses greeted the sailors as they sped across Bouldner Bay riding the galloping stead of a rampant tide. Turn in behind the pier, round up into the wind, drop the sails and a tow back into Yarmouth Harbour just under 12 hours from when they left.

A great day’s sailing and a great day for Uzima. With £2,000 already collected and more to come in it’s been a fantastic way to raise money. Many thanks to all of our sponsors and in particular Yarmouth Sailing Club whose whole-hearted support enabled the event to take place.