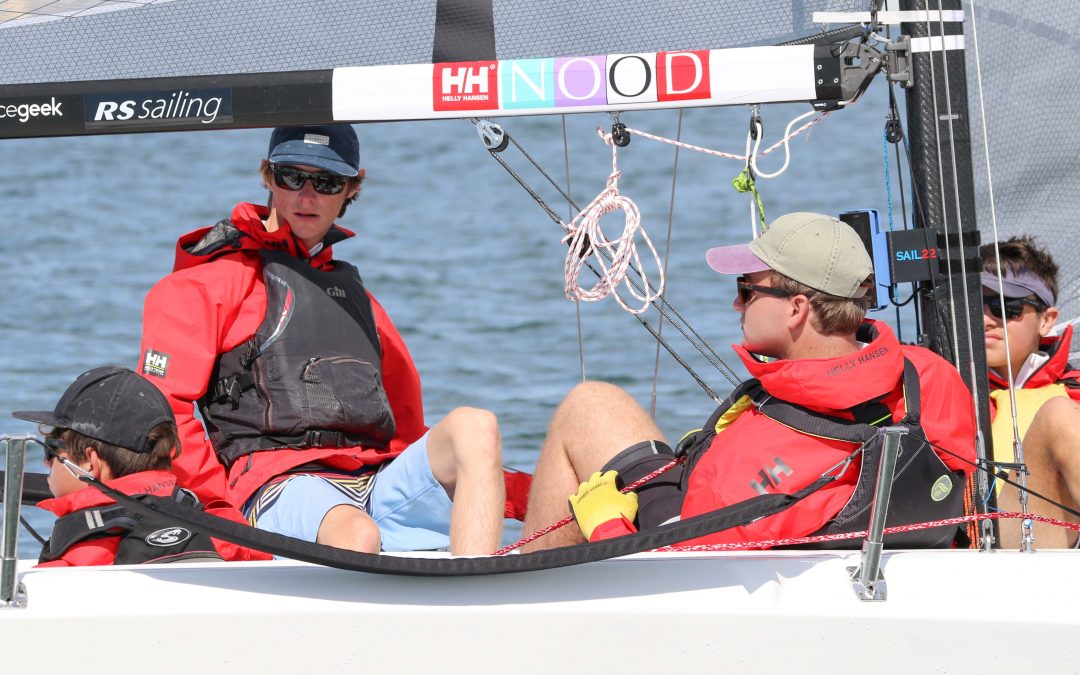 Continuing our San Diego NOOD hype, check out this review of one team’s experience sailing the RS21.

Thanks to the SDYC Youth Team; Matt Dorgan, Aiden Hoogland, Jack Egan and Jack Plavan for this content.

How was the boat’s learning curve?

Matt Dorgan – There was quite a learning curve when it came to the boat and getting it up to speed with the fleet. The boat for a day sailor or something like that would be super easy to figure out, but from a racing standpoint it has a lot of options when it comes to tuning; all weekend we were moving around jib cars adjusting spreader tensions and just tweaking the boat a little after every race and day. Towards the end, we were feeling good about our boat speed in the different and inconsistent conditions and it was a super fun process. We all really enjoyed the boat, it was a lot of fun! I think these boats would be super cool for competitive fleet racing, more standard club racing, or even match racing the boat would be awesome. This past weekend we saw their appeal as amazing all around boats!

How did our team adapt to changing conditions throughout the weekend?

Matt Dorgan – Throughout the weekend, upwind especially, we were always trying to focus on our boat speed, along with always having our head out of the boat and having good communication throughout our boat. We also were careful to never count anyone out because there were big comebacks especially when it got light and really shifty. The boat was nice because it lets you keep you head out of the boat, especially with a crew of four, which I have found a lot of boats take a lot more effort to go. I think this will make it a great, highly tactical boat! Downwind we were also sure to always keep our heads on a swivel, the four of us on our boat all have a ton of dingy experience and experience with a traditional kite match racing so we were trying to translate that knowledge to asymmetrical keelboat racing. The downwinds were fun because you could always make big gains.

What was your favorite thing about the boat?

Jack Egan (Helm) – As the skipper, my favorite thing about the boat was the super light helm. It felt like I was whipping around my FJ (Flying Junior) it was so easy. It was also a great tool to keep the crew on their toes, as they knew I could hurl them off the boat with a quick jab to leeward. In a close second though was the embedded torqeedo which was super easy for motors in and out. There were also many other small things such as the backstay in a singular middle position and the mainsheet running forwards which made the boat really sailable.

Do you think other juniors would enjoy competing in this boat?

Jack Egan – For sure! This generation of juniors is hungry to be able to compete against adults in a boat as similar to their dinghies as possible (so we give the smallest advantage possible), and the RS21 bridges the gap even further. Not only for fleet racing, but also for match and team racing. Match racing especially is on the rise in the junior world with events like the Rose Cup becoming one of the most coveted titles in junior sailing. Almost all of this racing is done in boats that were made well before we were born though. I have absolutely nothing against old boats, along with most of the junior sailing community, but the sailing world has had many innovations in the past 30 years and many of these are showcased in the RS21. I think the lightweight design of the RS21 and super easy maneuverability would be ideal for Match and Team racing. We even practiced a few back down maneuvers in between starts this past weekend to get a taste of match racing in these boats.

How was the experience of sailing in the class’ first one design regatta?

Jack Plavan – Sailing in the first one design regatta for the class was a truly unique experience. It was great because everyone was in the same situation so we were all happy to share information. All the racing was surprisingly close, especially the first two days. I am curious to see what the class develops into and look forward to tracking its progression and hope to have another chance to compete in it!

How did the boat sail in different Breeze?

Aidan Hoogland – Everything about this boat allows for maximum speed. Having large sails on a light and agile hull meant planing in around 15 knots could be achieved with minimal effort. We discovered you had to sit pretty far back when planing which made it feel that much more extreme and exhilarating. On the windiest race which wasn’t much past 15 knots, we were able to hit 12 knots! The jib set up was also tailored for windier races. The two to one jib sheet setup, combined with a cleat in the ideal spot made playing the sail in puffs painless. Although hiking was not allowed, the massive keel kept the boat at a very stable heel angle. This made the racing more about speed and knowing the boat rather than who had the biggest crew on the rail.

How did the technology on the boat advance the sailing?

Aidan Hoogland – There were two major pieces of technology on the boat, the Race Geek and the Torqeedo. The race geek could “ping” the starting line, display boat speed, angle, a timer, and depth. It’s always nice to know these numbers, but other types of boats have similar technology. The magic came later on, the RS representative would take data from races of multiple boats. He then deciphered it and returned it to the sailors. It made the fleet come together and gave a huge boost to learning the boat. The Torqeedo (the small electric motor) was really well incorporated into the boat, it was deployed by a simple pulley and was easy to operate. A plate on the bottom allowed it to lay flush with the bottom of the boat when sailing. This motor allowed us to get to the race course in light breeze quickly, leading to maximum time on the race course which is always a plus. Not having a traditional outboard engine meant we didn’t have to lug it around or deal with gasoline. The batteries were very small and accessible, after being charged overnight were ready to go the next day.