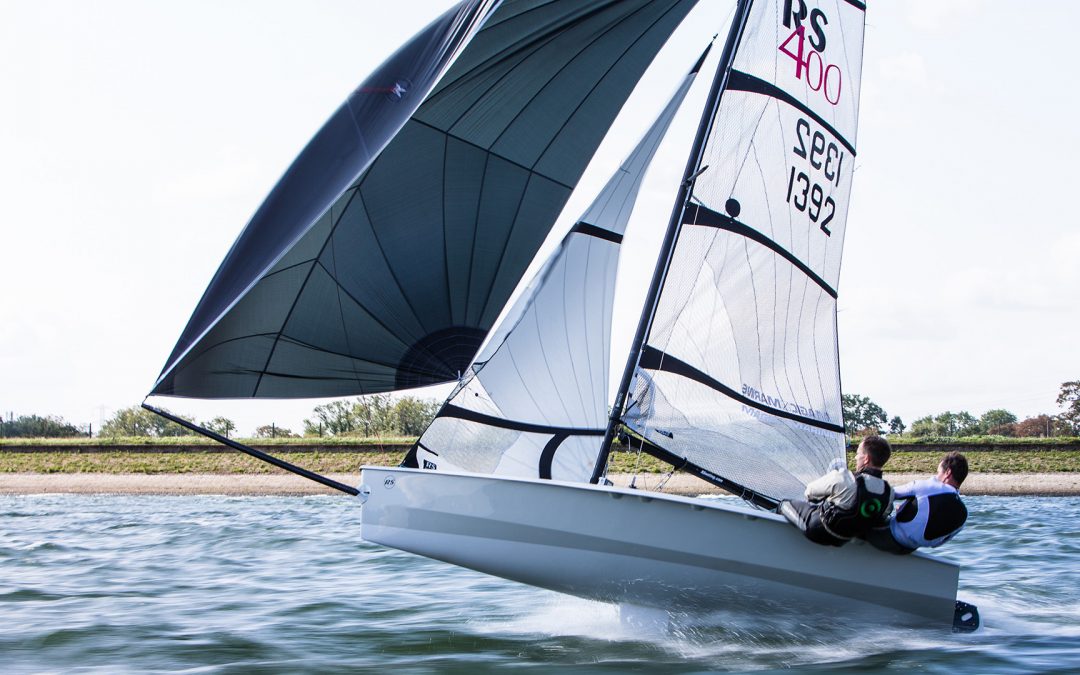 It would appear that you have to throw a lot of obstacles at the RS400 fleet to stop them from turning up to the Inland Championships. A poor and uncertain weather forecast, a one day event, a long drive, no evening get together, no prizegiving, along with a legal restriction on how many friends you could talk to  simply weren’t enough reasons to stop 40 teams arriving at Grafham SC for this year’s event.

But while the venue and entry list were familiar to many, the shoreside organisation was different. An online briefing, changing in the dinghy park and boats allocated one of seven designated slipways ensured that the fleet did the right thing in the face of the current situation and stuck to the rules – and it worked.

On the water there were some who seemed determined to take this enforced separation even more seriously by doing everything they could to socially distance themselves from the rest of the fleet. Some, like Mike Sims/Mark Lunn (1488) and Nick Craig/Katie Burridge (1500) chose to scorch off the front of the fleet into unspoilt areas of clear air on the race track while others, went for the odd swim to let the bulk of the fleet pass.

But for most of the fleet the racing was everything we have missed this season. Good courses, tricky tactics, close racing and plenty of on the water banter. The Inland Champs was as active and competitive as you would expect and very welcomed by all.

The weather was the hardest thing to figure out. The low pressure system that was sitting over the UK and that had been teasing the Met Office all week as it meandered around the middle of the country, dragging its heels like a teenager on a family shopping trip, was making it very difficult to produce a reliable forecast. A small movement either way looked set to deliver anything from flat calm to 25 knots. The only real facts that could be garnered from the various forecasts that changed by the hour was that this would be a day where sailing to what you saw would be key. Plus, it would rain. And it did, all day. But even that couldn’t stop the fleet.

Over the course of four back to back races, (with only one general recall, a miracle in itself), wind speeds ranged from 8-14knots from the south. With the windward mark tucked up towards the shoreline the trees and higher ground did their best to stir up the breeze into a code of puffs and shifts that few seemed to be able to decipher with any confidence.

Mind you, with a scoreline that read 1,5,2,7 many of us only dream of misreading conditions like that.

Craig & Co were being chased hard by Steve and Sarah Cockerill (1489) who were having their own struggle on points at least with Sam Knight/Chris Bownes (1235).

By the end of the four race mini series overall victory went to Mike Sims and Mark Lunn with an impressive and perfectly socially distanced 2,1,1,6.

Yet despite such an impressive performance Simms and Lunn had to settle with the strangest of prize givings as they were invited to collect their trophies from a table outside the club.

The 2020 Inland Championships were certainly different this year, but it was clear from the comments in the dinghy park that the competitors were extremely grateful for the efforts of all of those behind the scenes, from Grafham Water SC, the title sponsor Rooster Sailing and the RS Class Association, who had held their nerve to make it happen in very difficult and testing circumstances. And if this was how the fleet gets afloat in the current crisis, so be it.

Check out the results in full here.