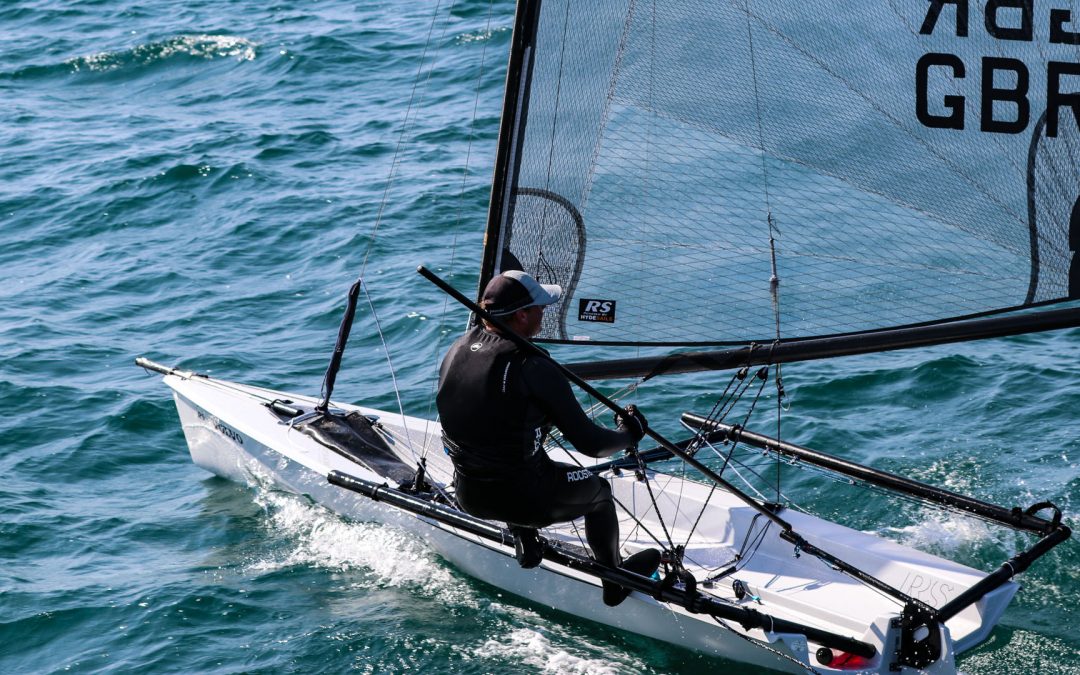 No two ways about it, the forecast was accurate and strong. A typically Autumnal blast, plenty of rain and leaves flying everywhere. A spectacular drive to Oxford Sailing club for the RS700 Rooster Inlands on 24th and 25th October. It was a very good turnout for the weekend, given all the restrictions in place. Some decided wisely to keep the powder dry for Sunday, with just a few foolhardy souls set out for the first day, three races back to back, four laps each race, and then some weary souls lugging boats back up the slipway afterwards. The wind direction was from the South, blowing down across the lake from the hills behind and bouncing through a forest of trees giving the optimistically minded a lot of opportunities for gains on the race course. Gusty it was. I have no idea on the numbers, but I would guess over 20 knots for the day and gusts well above at times. Apparently it rained as well. Onto the racing.

Day one, half the fleet wisely stayed ashore to watch the carnage unfold.

Race one – A leg stretcher for most, to banish any nervousness for the conditions. A slight committee boat bias bunched the fleet to the weather end, and a good start was had by most. Well apart from a bit of jostling that ended up with one on their side. Most of the fleet headed left, the short course favouring minimal manoeuvres. At the windward mark a few arrived at once and the lead was taken by Rob Higgins. A large squall blasted across the lake on the first run and took out the leaders allowing a surprised Ben Cooper to capitalise and hold off the fleet to the end, with Richard Wadsworth chasing down quickly and Theo Gayler recovering excellently from a start line capsize to come in 3rd.

Race two – A similar weather pattern, although a squall and a large left shift at the start suddenly left the pin end favoured and open for a port end flyer. Another hard four laps, with multiple capsizes and place changes gave Rob Higgins the well deserved win chased hard by Theo Gayler and Matt Conner.

Race three – The left shift at the start appeared again and the pin was a little more biased and taken advantage of by Theo Gayler and Ben Cooper who crossed the fleet comfortably with glee. The breeze increased rapidly during the race and survival and minimising capsizes was the winning technique. Theo Gayler and Richard Wadsworth proved to be most adept and crossed first and second. Ben Cooper managed to just get ahead of Rob Higgings on the line. The fun really started at the end of day one when a huge squall flattened most on the lake who hadn’t yet finished, some who had just finished, and the close proximity of finishing line to the reservoir wall caught some out. All credit to the members of the fleet who had finished to run out and help those who had been caught out and blown onto the wall.

Race four – Perhaps inspired by the previous day, a group headed for the pin for the first start, unfortunately for them, the shift was against at the start and the prosperous started at the windward end of the line and held a comfortable advantage. Ben Cooper headed out this bunch and put some distance on the fleet on the first lap. Unfortunately on the second run a beating Contender slipped off his invisibility cloak and appeared right in front (that’s my story anyway). An attempted crash gybe lead to a crash capsize and the fleet sailed past headed to the finish by Matt Carter, Rob Higgins and Richard Wadsworth.

Race five – conditions were close to perfect: sunny wtih an increasing breeze. A very square start line put the fleet more equal for the first beat. Those that headed left prospered; Theo Gayler started well and led from start to finish followed by Richard Wadsworth and Ben Cooper with a rapidly approaching Rob Higgins in fourth.

It was an epic end of the year event, making many stories to be told and embellished over the Winter. Theo Gayler was the worthy champion having built a consistent series. Rob Higgins pushed hard to a well deserved second place.
A huge thanks to Oxford Sailing Club from the RS700 class for putting an excellent event on in challenging circumstances. In particular thanks must go to Richard and Maggie Hall and their team for running the racing, all the rescue boat crew and the catering crew for keeping us fed. Thank you to Rooster for being our great event and national tour sponsor.

The RS700 class is regrowing rapidly offering a huge amount of bang for buck, great performance and a challenge to sail, but with competitive second hand boats available from £2 – £4,000 and some excellent venues for 2021 including Garda, there is no better time to join the class for some socially distanced Winter practice ready for, hopefully, a new dawn in 2021.