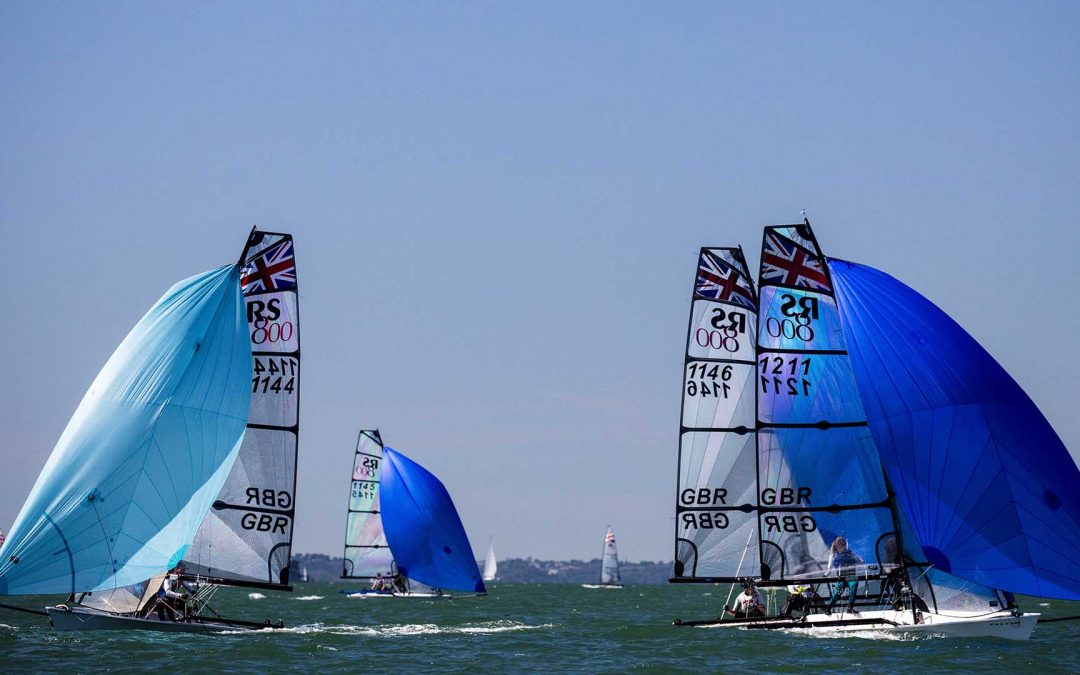 Well I have lucked in to do the runners and riders, I have fewer teams to critique this year. Let’s have a look at the crews who regularly find themselves at the front of a championship.

Luke and Emma McEwen – Anyone who has any interest in the RS800 probably know these two.  Multiple National and European champions, their preparations for this year’s championships involved cruising around the south of England in their yacht.  Having done exactly one race in the last 6 months I hope they don’t try to stow a nice bottle of red or cups of tea down below for afters.  In their favour is boat speed to burn and many years of experience to draw from.  I suspect they will still appear at the sharp end come the end.

Tom Morris and Guy Fillmore – Our media wizzes with textbook technique.  Responsible for bringing a new level of video analysis to training, bimbling, honing techniques and then telling the rest of the world how to do it.  My pick for leading the event from race one so long as we don’t have less wind than forecast or they have to make a last minute call to go above or below a slower boat when it’s breezy.

Hugh Shone and Fiona Hampshire – Good looks, talent and charisma, these two could be the poster crew. They also have been on the podium before, just not with each other.  Been seen practicing and know how to make an RS800 go very fast, this team should be in the silverware.

Phil Walker and John Mathers – Can’t remember the last time these guys did an event together and may not have sailed together since.  It probably won’t matter.  Pick your cliché, ‘Speed to burn’, ‘Forgotten more than I’ll ever know’, ‘How much did you weigh?’ or ‘we’re launching in 15, where are they?’.  Covid may prove a useful ally as without late night socials or nightclubs they might make the start line every day.

Megan Brickwood and Steph Orton – No RS800 nationals is complete without some young Olympic hopefuls having a relaxing few days’ sailing with the amateurs.  Steph is an RS800 nationals regular and took 2nd spot last year, can she go one better this year with her 49erFX teammate?  Or is it all about a relaxing weekend with her dad and sister?

Rob Gullan and Mari Shepherd – Whatever you do don’t mention spreaders.

Cameron and Darrol Moss – Blisteringly fast when upright, especially when the waves are up.  Tend to struggle a little at the championships so the smaller fleet might suit them perfectly.  Fast enough to win races, will this year be that time or will the flat water of Weymouth Harbour stop them from showing their ‘win it or bin it’ potential?

James Penty and Eddie Grayson –Showing us southerners that they do sail RS800s in the North and sail them fast and well.  The ability to consistently bang in single digit results should see these guys in the prizes.  But then I have said that about all the other crews too.  Some of them are going to miss out.  But probably not these two.  Maybe.

Ralph Singleton and ….. Mike Chapmoan? – It’s hard to not say Ralph and Sophie isn’t it!  Ralph levels with Andy Jeffries as the helm who has competed in the most Nationals this year.  Don’t make the mistake of thinking Ralph is just making up the numbers though, he is rapid and not afraid of a port tack start.  Even if it isn’t on.  Probably best to duck him instead of calling to be honest.  Sailing with a friend instead of family this year the form book is yet to be written.

Ben Palmer and Bruna de Queiroz – Another new pairing for this year, Ben has proved before that a new crew doesn’t slow him down.  Fast enough to take race wins but possibly lacking consistency to challenge for the podium.  Again we will have to wait and see!

Of course all of the above could be blown away by one of the new teams this year, of which I am happy to say we have plenty.  Nine boats are coming from Hayling Island SC which is amazing, tips on how to grow a fleet anyone?  Big thanks to WPNSA for hosting us at very short notice – we are very fortunate to be able to have the event.  Here’s looking forward to a slightly smaller but just as brilliant Volvo and Noble Marine RS700 and RS800 national championship in association with Hyde Sails.