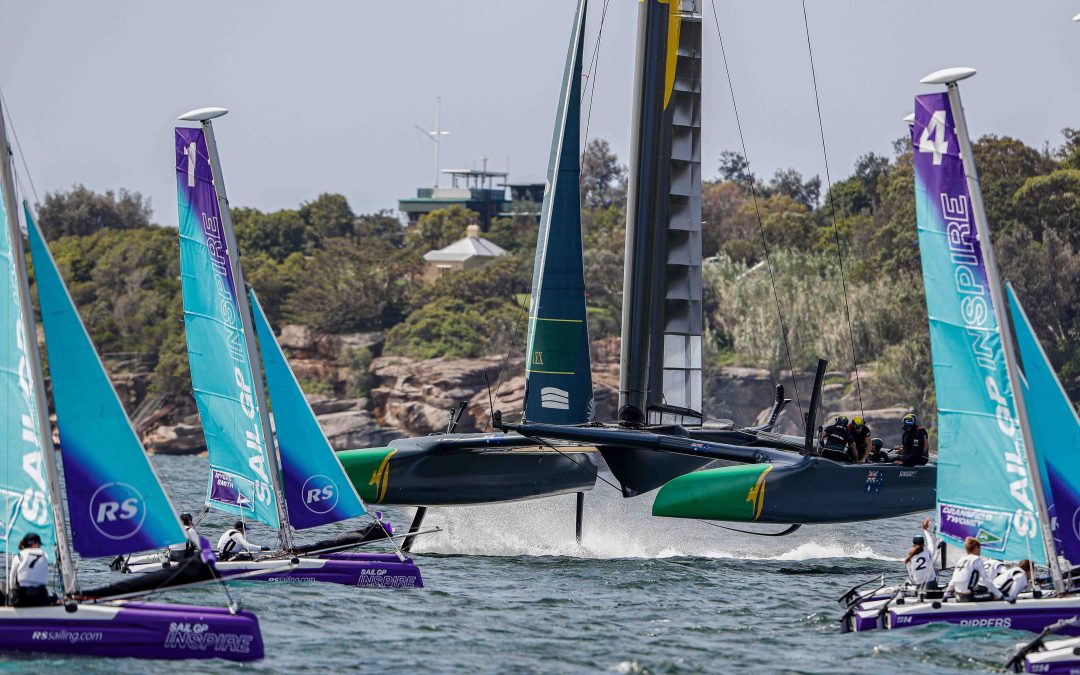 SailGP Inspire program Season 2 has officially kicked off and this time it was the turn of the Sydney Harbours’ young sailors to be awed by all things SailGP.

The SailGP Inspire program was launched at the SailGP Cowes race in the first season and it has gained more momentum and passion from everyone it touches ever since.

Sixteen young sailors, made up of 8 mixed teams, represented 8 Sydney Harbour sailing clubs. The SailGP Inspire Rippers would get the chance to meet the SailGP teams, visit the F50 tech base, race in front of the huge crowds on Shark Island and get close and personal with the incredible F50s.

The packed 3 day program was made up of fun training, racing, a tech tour around the F50s base and a chance to hang out with some of the F50 teams and sailors. Some of the Rippers had never trapezed or used an asymmetric spinnaker before, most of them had never sailed a catamaran but none of the teams, however experienced they were as racers, had raced in front of live cameras or crowds of SailGP fans.

The first day was all about training with lots of practice races to ensure the Rippers would entertain spectators with some amazing short course RS CAT14 racing. These very capable young sailors had no trouble in getting to grips with these little CATs and the practice race on a part of F50 race course looked awesome whilst it was captured by a full broadcast team. As the teams packed their RS CAT14s away at the end of the day, there was much excitement about what lied ahead over the next 2 days.

The SailGP Sydney Inspire RS CAT14 regatta was made up of exhibition racing just before the F50 racing schedule started and in between their races, with thousands of fans, friends and family watching.

The racing was short and sharp in tricky wind conditions, with each team needing to count 9 races consistency was going to be key. It was tough for the sailors but brilliant for the spectators as the gains and losses around the racecourse were huge. All 8 teams had mixed results, with some great races and some they would rather forget but 3 teams managed to keep themselves out of trouble and make the most of the tough conditions.

Going into the final race only 2 points separated the 3 front running teams, after 8 races, the young team from Manly 16ft Skiff Sailing Club – managed to take the win.

With no time to spare the 8 teams were rushed ashore for a very special prize-giving which they will remember for a very long time.

All sixteen sailors received their participation medals on the main SailGP stage on shark island, with the top 3 teams being presented their trophies by no other than Sir Russel Coutts. As the young sailors left the stage there were high fives shared with the victorious GBR Ineos SailGP team! They were waiting just off stage ahead of the main presentation.

“The SailGP Inspire program is the vision of Sir Russel Coutts and it takes a team of passionate people to make it truly special. The combination of the SailGP Inspire staff, the local clubs, MarkSetBot, Rooster, Waszp and of course RS Sailing is what makes this program work. The events have got bigger and better each race venue we visit, so roll on San Fran! We can not wait to inspire the next bunch of Rippers” Jon Partridge – CEO RS Sailing.