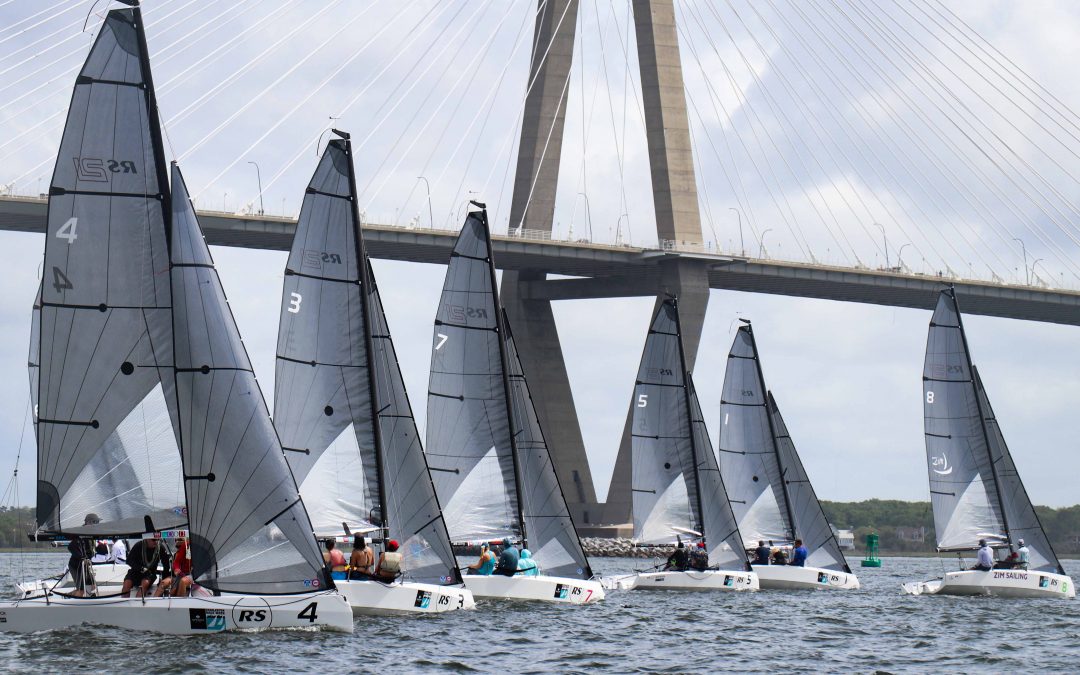 The ‘Six Pack’ gained some further strength and developed into the ‘Eight Pack’ going into the iconic Charleston Race Week. It was the RS21 fleet’s first time at the event and the eight keelboats battled in challenging conditions over the course of the three-day regatta.

On Thursday afternoon Sail22, the RS21 delivery partner for North America, greeted eight charter crews as they headed out in 11-17 knots to practice in the notoriously tough conditions Charleston Harbour provides.

Circle 4 race area hosted the RS21 class for four races in a long day of racing on the Charleston waters. Friday started with light conditions under 10 knots, with ripping current effects across the racing circle. Wind speeds quickly kicked up throughout the day, gusting above 25 in one squall during race 2 and holding out more steadily near 15 knots toward the end of the day.

Team Sail22 lead the racing on day one, pinching out three bullets in the first three races. An exciting moment from the final race of the day was the downwind finish of the RS21 Junior Race Team, helmed by Lucas Sawin and stacked with local youth racers, as the boat cruised ahead of third place Sail22 after a fast set at the windward mark.

With four races under their belts, the charter teams were starting to get the hang of the new boats and discovering their own methods for maximizing speed. Fuelled with beverages and snacks the sailors held debriefs onshore led by Sorosky, Alex Newton-Southon CEO of RS Sailing and Ed Furry of Sail22.

Upwind discussions centered around trim and placement of jib cars during the debrief, underscoring how dialled in racers were with understanding the dynamics of the RS21 design and figuring out the best sail shape. The teams had a chance to analyse the data from RaceGeek monitors outfitted on each RS21 charter boat before for day two of racing.

Downwind legs on Saturday were significantly different to Friday, as more teams figured out to sail hotter angles and achieve faster speeds on the RS21. Top speeds of the day across the fleet hovered around 14 knots.

As sailors settled into their dynamics, the sailing became tighter, with competitive starts and lots of shifting around throughout the day. In particular, other crew members became more focused on weight placement in the responsive hulls.

“You can really move the boats with crew weight,” said Jay Wonch, who trimmed jib on the RS21 from Annapolis Yacht Club.

U.S. Sailing President Jack Gierhart battled with Team Sail22 for an entire beat in race 6 of the series, with both RS21s pointing high and manoeuvring over significant chop and current in Charleston Harbor.

To round off an awesome day, the RS21s were used for a Pro-Am event on Saturday evening. Sailors of an excellent calibre, including Zeke Horowitz (J22 and Viper world champion), Tony Rey (TP52 and Maxi yacht Tactician) and Chris Larson (multi-class world champion), joined students from a local high school and the College of Charleston for some post-event social races. It was great to see the RS21 showcased for what she was designed for, effortlessly simple grassroots sailing, but still technically responsive enough for professionals.

On the final day at Charleston Race Week, sailors took on high winds and lots of chop in the RS21 on Circle 4.

Sunday’s conditions tested sailors, as the breeze built from 15 knots to 20 knots over the late morning. By midday, puffs were above 20 knots, pushing the RS21 to a new recorded speed of 18 knots during a downwind leg by Team Sail22. In addition to high wind speeds, sailors had to deal with a fair amount of choppy waters as well as the notorious Charleston current.

The event marked the second major competition for the RS21 as a one-design keelboat.

Team Sail22, helmed by Amy Baxter of Chicago, took the top spot, winning 7 out of 9 races over the course of the three-day event.

“All credit to my team, who kept us going fast upwind and ripping downwind,” said Amy Baxter. “We spent a lot of time working on our rig to perform and adjusting the RS21 equipment whenever conditions changed out on the water. But our biggest success came with our constant communication. As a team that had never even met before Wednesday, we worked together better than I could have asked.”

RS Sailing would like to send a massive thank you to; Charleston Race Week for hosting such an incredible event, RaceGeek for providing every boat with electronics and data analysis software, Spinlock for providing the fleet with life jackets and of course Sail22, who helped make it all happen.

The next stop for the “six pack” is the Annapolis NOOD Regatta, 3-5 May and then it’s onto the rest of the NOOD Regattas. There are a couple of charter boats still available, so it is not too late to get involved. Please click here to visit the RS Sailing website.

With the RS21 fleet tipped to more competitive than ever next year it’s the perfect time to get involved. Get in touch with your local dealer to find out more about the RS21.