Six RS21s line up at the San Diego NOOD Regatta. 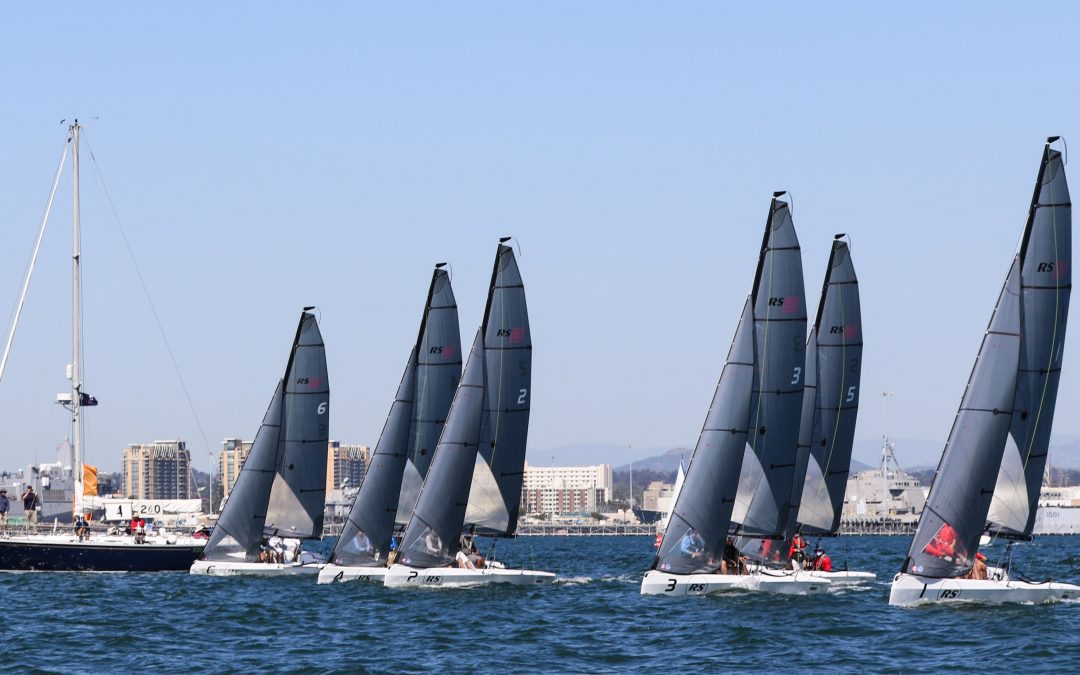 After many months of planning and a few sleepless nights, the six RS21s, now named the ‘6 pack’, touched down in San Diego.

Sail22 (the RS21 delivery partner for North America) unloaded the six boats from a 40ft container and set to work rigging the charter fleet. On Thursday afternoon, six teams arrived and received a briefing on the new one design fleet before beginning a training session on the water. The sailors spent the afternoon is near perfect conditions in San Diego Bay getting to know the boats.

Race day 1 – Friday 14th March
In glorious sunshine, the RS21 fleet prepared to launch. The morning boat park chat was centred around rig tension. As gauges were pulled out of kit bags, Sail22 were on hand to offer teams advice and explain the effect that their rig tension would have during the light wind day that lay ahead of them. The sail drive Torqeedos (electric powered engines) were lowered and the fleet cruised out to the race area in the southern end of San Diego Bay.

As the air warmed up and the breeze built to a stunning 8-10 knots, the Principal Race Officer wasted no time in starting the first of four races that day. As the six boats jostled for prime position on the start line and headed towards the windward mark, it became clear that the fleet were in for some close fought and exciting racing.
Three of the six teams earnt themselves a bullet during day one and Team TC, skippered by Alan Field and Scot Tempestas’, Baba Booey, ended the day tied on points in first place. The San Diego Yacht Club Helly Hansen Junior team trailed in third place by just one point.

As the fleet started to sail back to the dock, the RS Sailing media boat shifted her focus from media to hospitality, as well earnt drinks were provided for the sail in.

Race day 2 – Saturday 15th March
The second day brought gusty and shifty conditions which saw the leader of each race change multiple times. Team TC/Alan Field tuned into the shifts and came away from the day with four bullets. By mid-afternoon the breeze had built to planing conditions which, as the teams played around with angles down wind, set the fleet alight.

As racing came to a close, the boats were quickly derigged and the sailors headed over to the San Diego Yacht Club NOOD party. As expected, the Yacht Club put on a great party and Tucker Thompson presented a Q&A session with the US Americas Cup Challenger, American Magic.

Race day 3 – Sunday 16th March
Sunday brought a flat calm morning which saw the fleet motor out across San Diego Bay and as if on cue, upon the fleet reaching the race course the breeze quickly filled in. With only two races left in the ten race series, Team TC/Alan Field got to work on claiming this inaugural title. Once again, the racing was tight and Alan and his team managed to find a way through the fleet to claim the final race wins. Click here to watch a post-race interview with Andrew LaPlant.

RS Sailing would like to send a massive thank you to; Coronado Yacht Club for their assistance throughout the event, RaceGeek for providing every boat with electronics and data analysis software, Spinlock for providing the fleet with life jackets and of course Sail22, who simply are incredible.

What has been learnt over the last few days? Firstly, the NOOD events are great! Secondly, it is possible to rig and de-rig the “6 pack” in a day. Thirdly, great sailing events can be simple! All you need to do is to bring your kit bag, rock up and race.

The next stop for the “6 pack” is Charleston Race Week and then it’s onto the rest of the NOOD Regattas. There are a couple of charter boats still available, so it is not too late to get involved. Please click here to visit the RS Sailing website.