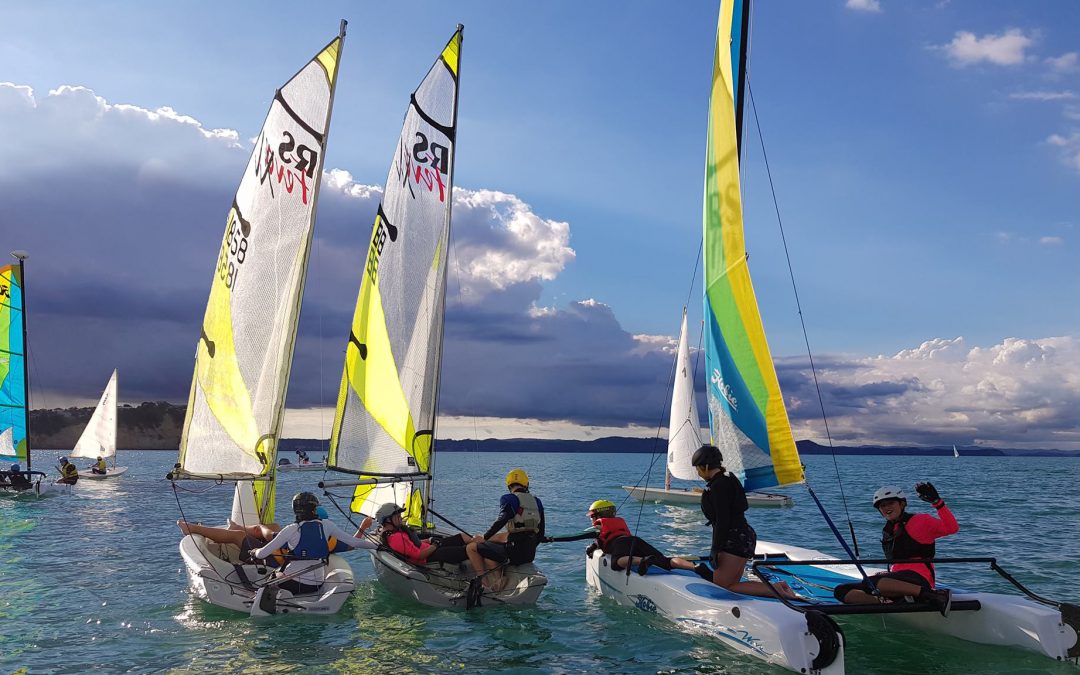 As we are nearing the end of the sailing season, an update on the activities of the Russell Coutts Sailing Foundation (RCSF) is long overdue.  We started this season with the appointment of Aaron Hume-Merry as our General Manager.  He hit the ground running with nearly 80 sailors enrolled in September 2017. We finished the summer season with close to 140 sailors, both Juniors and Adults participating in our program.

Our RCSF sailors now have the use of 24 O’pen Bics, four RS Fevas (including a brand new one recently received), three Flying 11’s, five Lasers, two Hobie Waves and one Flying Ant. This amazing selection of classes, in particular the double handed classes, has proven to be a huge hit with the sailors.  So not only was the RCSF well represented at the O’pen Bic Nationals in Queenstown, more recently we were able to send three RS Feva crews to the Nationals in Auckland.

The experiences that these sailors gain when travelling to events, whether they be in another part of the country or even another club in Auckland, is second to none.  The sailing is more of an adventure away from home, but the friendships and enjoyment of being out on the water somewhere different are paramount.

We have had a group of 15 young girls aged between 10-16yrs participate in a Girls Only program. When they weren’t all having fun in a variety of boats on the water, they have had the privilege of listening to speakers like Barbara Kendall and Molly Meech.

In February 2018, Leah Collis joined the RCSF to be the Learn to Sail Administrator and Coach. Leah has taken responsibility for the Level One and Two sailors, and has an excited group of sailors ready to take part in their first regatta in the next few weeks.

The April school holidays saw the Manly Sailing Club become a hive of activity for five very full on days.  The advanced sailors from RCSF, along with others invited from clubs around the country, spent five days on the water, improving their fitness, listening to guest speakers and having the best lunches any sailor could imagine!  Alongside these sailors, we had two and three day courses for other RCSF sailors, making sure they all got to try out new boats and practice their skills learned from the last season.

Our sailors who started the program two years ago when the RCSF was just getting started, are starting to move into Youth classes now.  We have six sailors in the Laser Radial, and we are looking to introduce the 420 and 29er classes next season.  They are all thriving in their next choice of boat and it’s exciting to see.

As the winter sailing comes to an end, we are getting ready for the annual Manly Mid Winter Championship (7th – 9th July).  This year we have over 50 sailors from the RCSF over four different classes, and then there are the sailors from all over the country!

We are already into planning for next season and next year and have already reserved space at Camp Bentzon on Kawau Island for the sailors to have a camp over Queens Birthday weekend 2019.  More details will follow on that in due course.

The support we receive from sponsors, coaches, parents and the Manly Sailing Club, is what keeps us being able to do what we do, which is getting kids out on the water and having fun, whilst learning a skill for life.