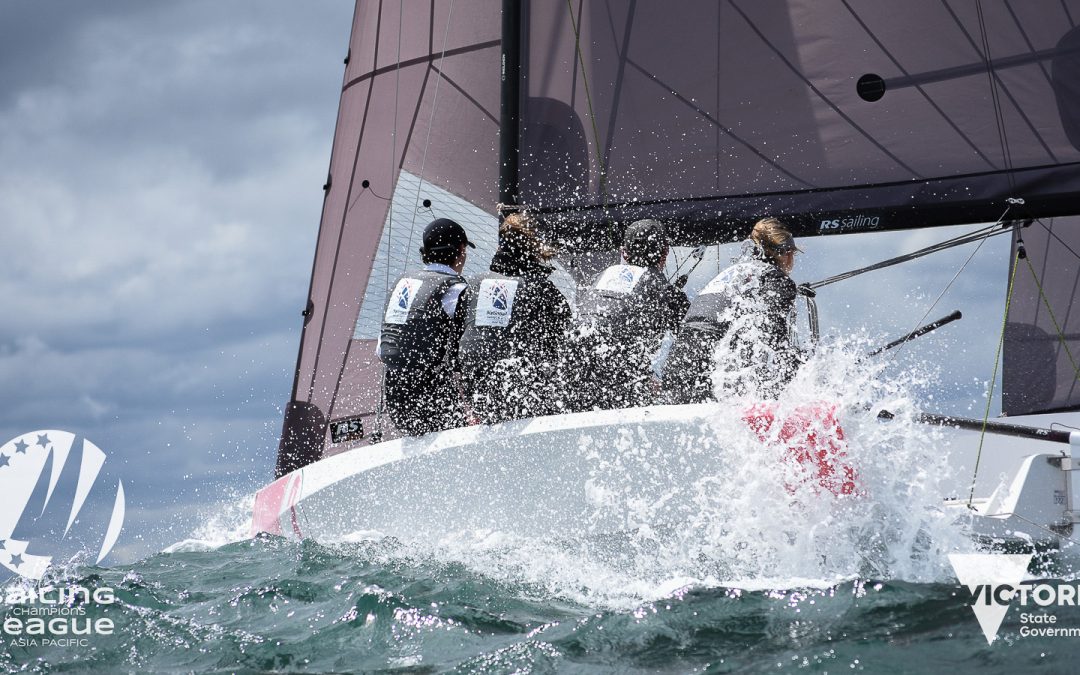 The 2021 Sailing Champions League Asia-Pacific season kicked off over the weekend of 6/7th February at the beautiful Mornington Yacht Club in Victoria, Australia. Using a fleet of 6 one-design RS21 Keelboats from RS Sailing, 12 teams from across Victoria as well as Tasmania entered the event and, after an impressive 31 race series being delivered across the 2 days of the event, the Royal Yacht Club of Tasmania emerged victorious. Helmed by Sam King with crew Chloe Fisher, Alice Buchanan and Charlie Zeeman, the RYCT team, who sailed consistently all weekend, saved their best until the last day, prevailing in the six-team finals series against some tough competition.

It was the second year in a row an RYCT team has taken out the Southern Qualifier with Oliver Burnell successful in Geelong last January. “Full credit to the team, I really owe it to them, they made me look good,” said an elated King after racing concluded on Sunday. A massive thanks to everyone who helped us, mainly the Royal Yacht Club of Tasmania … and to all the organisers at this club (MYC) and to Mark Turnbull for getting this kind of thing running. It’s just a really great event and we’re stoked to have Tassie take it out twice.”

Mark Turnbull OAM, Director of the Sailing Champions League Asia-Pacific commented “It was amazing to be back on the water again relaunching the SAILING Champions League: Asia Pacific after the challenges of the past year. Although much has changed, one thing that hasn’t is just how much fun the sailors had in the RS21s. These boats have been great at introducing the youth sailors into keelboats and sailing with crews of four or five, but importantly it is not a traditional , slow, ‘learn to sail’ boat, but instead something they are far more used to being in, an oversized skiff. The sailors have been able to step straight on and pick up the skills pretty quickly and not just have great racing, but importantly some great rides as well. The weather we had last weekend was full on, with not just 20+ knots of breeze but also some very large and steep waves that really tested out the sailors and the boats and they both came through with flying colours. For proof, check out some of the photos and videos from the event. We now look forward to stacking and loading the fleet of six RS21s onto a single truck and taking them on to Sydney NSW for the next leg, and the ability to do that is also a huge plus for us and another reason we chose the RS21.”

Based on the success of club vs club ‘league’ sailing throughout Europe, this concept is being offered to clubs in the Asia Pacific region, with them having the chance to compete to become a Sailing Champions League winner. Sailing clubs from the region are able to compete in qualifying rounds which enable them to gain entry to the Sailing Champions League Asia-Pacific Final (previously called the NSL Oceania Final) which, for the U22 age bracket, will take place on April 13th / 14th 2021, immediately followed by the Open age category sailors from 15-17th April.
The competition will be held at Cockatoo Island on the iconic waters of Sydney Harbour in New South Wales. The top ranking clubs from the SCL Asia-Pacific Final can look forward to a ticket to the 2021 Sailing Champions League Final in Europe, where they get to represent their club at the ultimate ‘club versus club’ battle.

Follow all the action to find out who will be crowned the overall winner of the 2021 Sailing Champions League Asia-Pacific!