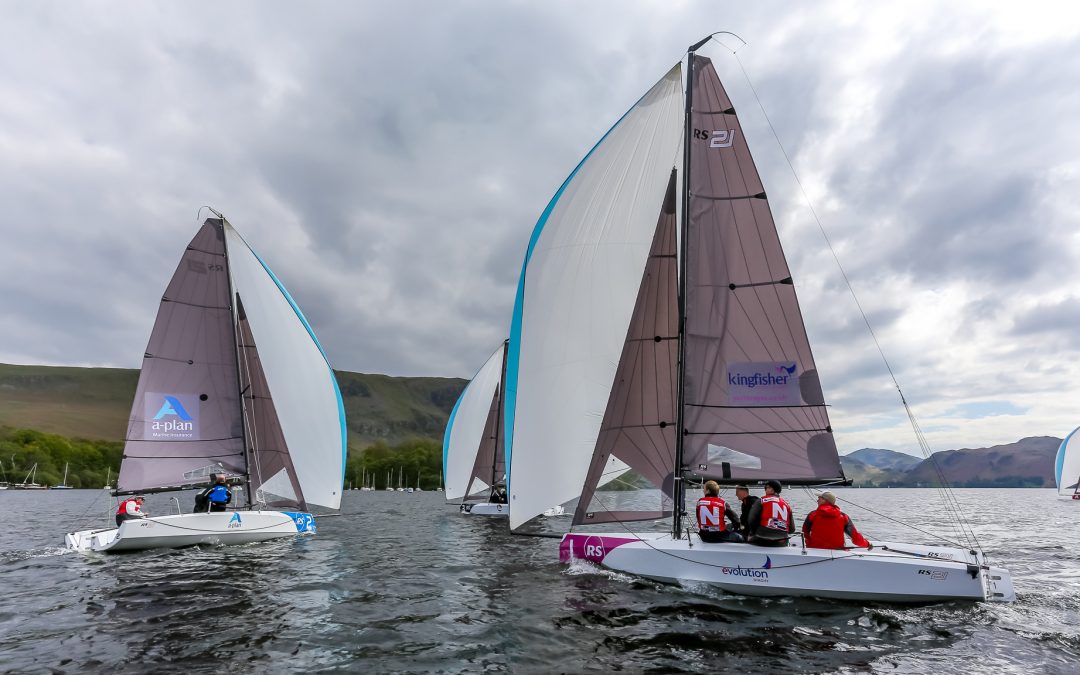 A home advantage proved to be the key ingredient for the first edition of this year’s British Keelboat League (BKL), as Ullswater Yacht Club topped the rankings in the first BKL qualifier.

The BKL is an opportunity for sailors to compete in an event as representatives of their club. The League is open to competitors spanning the full ability spectrum, from weekend dinghy sailors, to offshore yacht racers. Qualifiers are being held throughout the UK, in a sprint racing league format, with the top 2 teams from each qualifier claiming a place in the BKL final later this year.

With a moderate north/north westerly breeze forecasted for the event weekend, sailors took to the water for a training sail to familiarise themselves with the fleet of brand new RS21’s.

“We are so looking forward to this event!” David Clarke, Sailing Secretary of Ullswater Yacht Club and PRO explained, “the boats look wonderful and the forecast will provide some challenging racing.” The top tip for racing the weekend was to “keep your head right out the boat,” advised David, “The cream will always rise to the top. The best sailors will always win!” Sailors from the host club, took to the water for a pre-event sail later in the afternoon, whilst sailors from Horizons Children’s’ Sailing Charity also relished the opportunity for a shake-down sail.

The sun broke through the clouds as the teams headed onto the water at Ullswater Yacht Club for the first day of racing. With the racecourse set directly in front of the club house, it provided a perfect stadium atmosphere for the event.

Ullswater lived up to its notoriously gusty and shifty reputation which provided great entertainment for the spectators in the club house and close fought racing. The RS21s were often rounding the marks within seconds of each other and place changes were constant. As the fleet sailed into the darker, gustier patches of water, the crews worked the boats to maintain momentum through the next shift, lull and shift.

Boat handling proved to be challenging in the shifty conditions however, race two saw Ullswater Yacht Club 2 and Newcastle University Alumni engaging in an intense tacking battle up the far shore.

Jack Fenwick, skipper of the Horizons Childrens Sailing Charity, highlighted the importance of taking your time during manoeuvres.“Its been a steep learning curve for us. We have been quite successful at the leeward mark roundings. We have been taking our time, planning and preparing. We are getting better exits to the mark which is important”.

Rob Richardson from Royal Windemere Yacht Club and his team found that “with the racing being so tight it was so important to stay out of trouble. Get off the line with speed is the key”.

This is the one of the first times most crews have stepped foot in an RS21. With new crew combinations and a new boat, Chris Mulholland explained “my top tip would be to make sure there is lots of communication. There are four of us on the boat and lots of lines on the boat. Everyone needs to know exactly what to pull when and then you’re off!”.

As the sailors came off the taxi RIB winner of the day, Jono Shelley explained “the RS21 is perfect for this concept of close racing. I love asymmetric spinnaker sailing and I love the boat!”.

With slightly less wind forecasted for Monday, Nicola Abbatt from Ullswater Team 1 said “I loved that final race. We really pulled it all together and it was so enjoyable! I can’t wait for tomorrow!”. Jon Abbatt agreed, “Tomorrow we will make sure not to panic. Anything can happen so don’t give up until the end!”

As one of the home teams lead the way in the overall standing so far, both Royal Windermere Yacht Club and the Royal Thames Yacht Club were in hot pursuit.

With points tight moving into day two it was still all to play for!

A glassy lake greeted the sailors as they arrived at Ullswater Yacht Club for the final day of racing. After 16 races on Sunday, the teams were raring to get on the water for the final 8 races of the weekend.

After a short postponement as the wind filled in, the teams were off. Henry Arnold, 2018 British Keelboat League Champion, and his team from Royal Thames Yacht Club found their stride posting three bullets in the light, patchy conditions. “We have done a lot of match racing and team racing in Europe and this is the first time that we have been able to come to such an amazing location in the UK and just turn up and race in such a competitive fleet.” Arnold explained. “As a team, we are completely sold on this concept and can’t wait to get back on the water for the rest of the races this afternoon!”

The winners of day one, Ullswater Yacht Club team 2, struggled to find their groove as the breeze dropped below the forecasted 8-10 knots. However, Ullswater held such a large lead that despite a robust challenge by Royal Windemere and Royal Thames, the local team couldn’t be budged from the top spot. Jono Shelley the winning Skipper explained “what a difference a day makes! The team have been carrying me around the course today. Thankfully we had a really good run yesterday to make up for today.” International Umpire, Ewan McEwan explained “when you win, you win on your skill. That’s the beauty of one design racing.” Shelley went on to say, “I am so excited to sail in the final with my best mates and my brother. What could be better!” with racing concluded, Ullswater Yacht Club and Royal Thames Yacht Club became the first teams to stake their place in the British Keelboat League final.

During the Prize Giving, members, visibly proud of their team and with an entourage of junior fans created a wonderful atmosphere at the sincerely welcoming and supportive Ullswater Yacht Club, to which the BKL owe a heartfelt thank-you. The British Keelboat League would also like to send thanks to all boat sponsors (A-Plan Insurance, GJW Direct, PA Consulting Group, Kingfisher Yacht Ropes and MDL Marinas), Official Partners (RS Sailing, Rooster, Bainbridge International Limited and Draper Tools), our Official Photographer (Digital Sailing), the team of Umpires and Volunteer race committee for their contributions to the event. This event was a euphorically bright showcase of what is to come for the British Keelboat League in 2019.

With places still available in the remaining qualifiers, our final words go to local sailor Harriet Pulman, as she explained her first experience of League racing, “This is the first time I have raced in the British Keelboat League. The races are so short and snappy. I would highly recommend signing up. It has been great fun, the other teams have been really friendly and it doesn’t matter how experienced you are!”