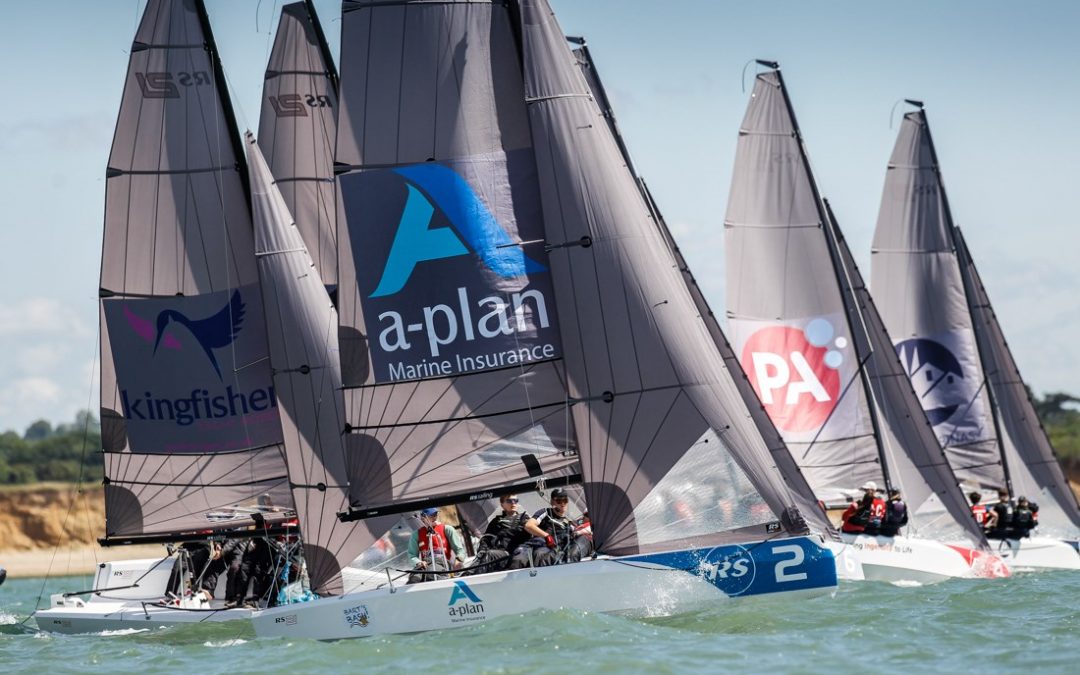 The British Keelboat League Youth Qualifier was a testament to the talent coming up through the British sailing ranks, with the 11 teams of 16 to 25-year-olds smashing out 22 races in two days. Racing was tight and tactical, with the fleet finishing within seconds of each other in most races.

Saturday brought champagne sailing, 8 to 15 knots and the short sharp chop that the Solent is infamous for. The breeze started below 10 knots but built to a good 15 knots by lunchtime before fading back out to below 8 knots by the end of racing for the day. The Race Officer, with the aim of running a very strict schedule, promptly got racing underway. This was to the detriment of the Grafham Water team skippered by Robbie King, as they were late for the start, costing them points that would have proven to be highly valuable later in the day. Opening the event with a win was the University of Bristol Team, helmed by Joe Burns. Burns’ team was closely followed by the Royal Ocean Racing Club team helmed by Christian Vroon.

Racing was hotly contested throughout the day, with a total of 7 different teams adding race wins to their overall points tally. The standard of sailing on show from these young athletes was excellent to see, with sailors from a range of backgrounds within our sport coming together to compete in this event. From regular keelboat racers and offshore fanatics to the young Dorchester Sailing Club team who are Laser 4.7 and Laser II sailors at their local club. These young people are a credit to the sport.

Innovative techniques, not previously seen by those sailing the RS21, were demonstrated by crews too, including goose winging the spinnaker on the downwind leg. This proved effective for some who found the groove but left others dead in the water. Competitors were also tested by the jurors as 4 teams were punished for not retracting their poles in time after rounding the leeward mark. But, by the end of day one, with racing concluded after a staggering 14 races, the top three teams had begun to establish a lead from the remaining pack. Lead by Annabel Vose, her Royal Southern Yacht Club team were closely followed by the University of Bristol and Robbie King’s Grafham team in 2nd and 3rd respectively. King’s team haunted by their woes of race 1.

Sunday brought fickle pressure and sloppy Solent chop, the breeze ranged from 3 to 12 knots, but after a towed escort to the sailing area and start line, teams were greeted by a steady 8 knots. The University of Bristol opened day 2’s racing as productively as day one, clinching 1st place in race 15 and putting some pressure on the leading host club.

By noon and with just a handful of races remaining in the schedule, teams were forced to wait under the AP for approximately 30 minutes as the breeze faded and changed direction. Luckily for the teams, this didn’t last too long and racing resumed with conditions similar to the morning session. This fuelled some successful racing for Anna Prescott’s Grafham Water team, posting 1st places finishes in races 19 and 21.

Daniel Nickalls Marconi Sailing Club team won the final race of the weekend, keeping ahead of Robbie King’s Grafham Water team in race 22. This brought the sailing in the British Keelboat League Youth qualifier to a close, much to the disappointment of all teams, who campaigned for even more races. The competitors pleading for more was a testament to the efficient and precise event delivery by the Royal Southern Yacht Club staff and volunteers, a great job done. With that said, teams eagerly awaited the final results and prize giving.

Consistency, in addition to excellent sailing, proved to be the key ingredient to success as the leaders from day one Royal Southern Yacht Club were presented with their prizes for winning the event. Annabel’s team only finished outside of the top three once in the 12 races they sailed throughout the weekend, a formidable display by her team. Second place went to the University of Bristol who posted the most individual race wins (5 in total) and in third place was Robbie King’s Grafham Water team. Full results can be found here on the British Keelboat league website.

A special mention must be given to Grafham Water Sailing club as their other team skippered by Anna Prescott finished in 4th pace, just 2 points behind Robbie’s team. A credit to clearly the fantastic competition and membership at the club, kudos to Grafham!

Congratulations to all competing teams and thanks for your participation in the British Keelboat League. The next qualifier will take place at the Royal Western Yacht Club on the 20 and 21 of July. There is still time to get involved, head to the site now to enter your team – www.britishkeelboatleague.co.uk/bkl-royal-western