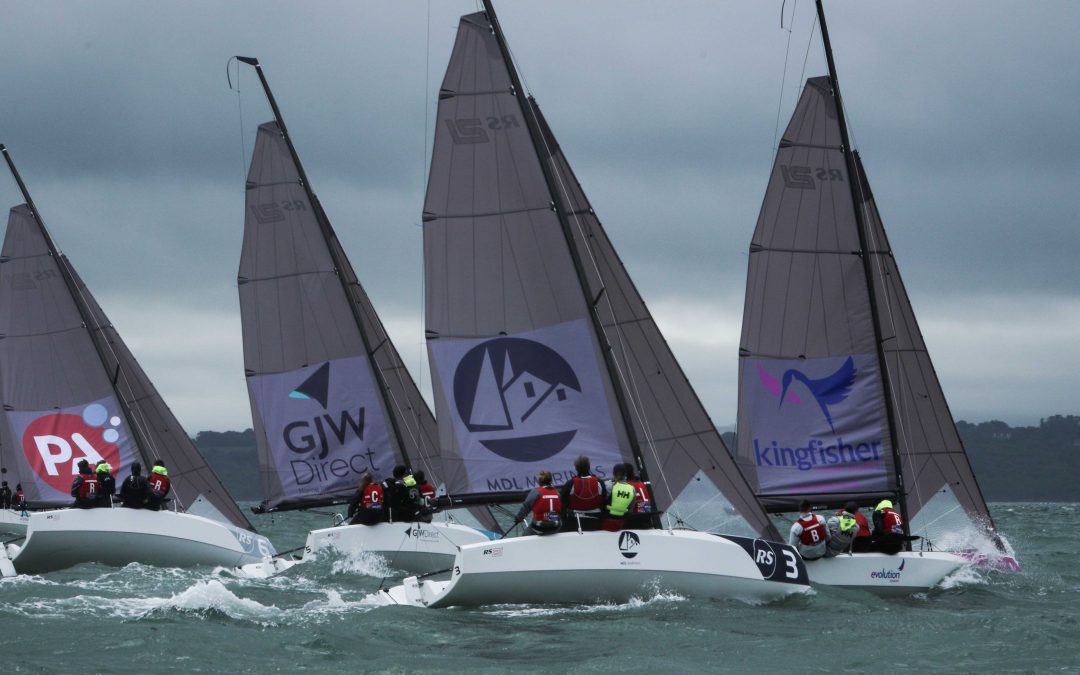 The advantage of home waters proved to be successful again in the 3rd British Keelboat League Qualifier hosted by the Royal Lymington Yacht Club. But it was their neighbours Lymington Town Sailing Club (LTSC), who topped the leader board after 2 days of racing on the sprint course in the West Solent. Proud Skipper Liam Willis (a member of both the winning club and host club) said, “me and the lads can’t wait to compete at the finals.” Joining them in the finals will be Bournemouth University Sailing Club after a great display on day one with 3 race wins.

The Royal Lymington Yacht Club welcomed 10 teams on Saturday morning and Race Officer Malcom McKeag promptly got racing underway in the stiff south westerly breeze. With an average wind speed over 20 knots, the opening race of the day went to the London Corinthian Sailing Club team skippered by Anna Dobson. They were closely followed by the young Wessex team.

The first all-female team in the BKL for 2019, representing Royal Southern Yacht Club and skippered by Annabel Vose demonstrated excellent awareness on the start line as they managed to repeatedly get across the fleet from port flyer starts. Their ability shined through after claiming to top spot in races 6 and 12 on day one.

Despite Juliet flag flying for the day in its entirety, the day certainly wasn’t short of action on the racecourse. Impressively close downwind sailing was seen, with teams working hard to take advantage of the sea state to get the most out of the main and jib sail combination. It was in the final few races of the day where local team LTSC began establishing their lead on the pack going into Sunday.

Sunday’s forecast looked to be even more challenging conditions for sailors, with the average wind strength build from the high teens, towards the high twenties from the south west by mid-afternoon. In addition, the tide switching in the afternoon was due to kick up the back-shuddering chop that the Solent is renowned for. This didn’t deter the teams or the Race Officer from getting out early under reefed mainsails to face the conditions head-on.

The 4 races that were completed before the abandonment were thrilling. The teams adapted well to the new sail plan and they worked hard on the downwind legs. The Wessex Sailing Club Team were the first to take advantage of the conditions, posting a win in race 14 in a very closely fought final run to the finish line. Swansea University Alumni responded in the perfect manner in race 15, learning from the surfing techniques displayed by Wessex in race 14, they were able to out surf the competition, surging forward to win race 15. The final race of the event went to the host team Royal Lymington Yacht Club, skippered by Hattie Rogers for a well fought final race for the young team in this regatta.

The very best efforts were made by the race officer to facilitate more racing but with the prevailing win increasing to over 25 knots and the sea state building, the decision was made to send team back to the club and prepare for prize giving. A call unanimously accepted by the teams. Final Results from the event can be found here.

It’s a quick turn around for the fleet of RS21s as they travel to Royal Southern Yacht Club for the BKL Youth Qualifier this weekend (22nd and 23rd June). These events are made possible thanks to the great work of each host club and the sponsors. So, a heartfelt thanks must be shared with the Royal Lymington Yacht Club’s Staff and volunteer team who organised and ran the event. Thanks must also be sent to the British Keelboat League sponsors; Kingfisher Yacht Ropes, A-Plan Insurance Brokers, MDL Marinas, PA Consulting, GJW Direct, Rooster, Bainbridge International and RS Sailing.