The town “where the mountain meets the sea” – RS Tera Worlds 2019 Ljungskile, Sweden 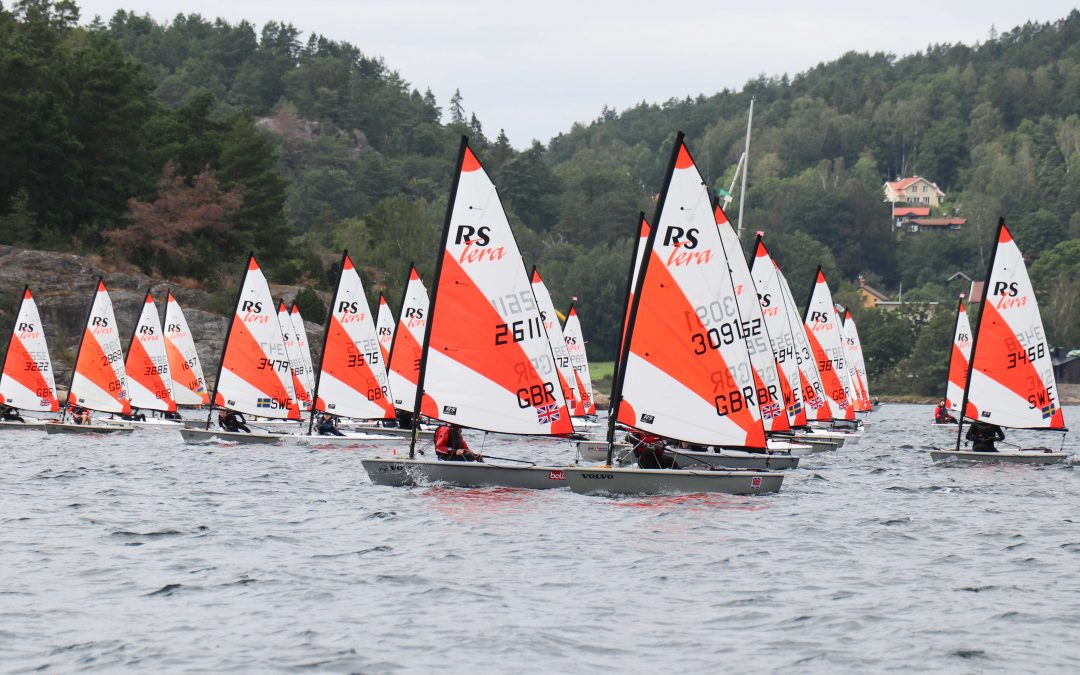 Sailors and their families were warmly welcomed today to the sailing club in Ljungskile, Sweden for the opening ceremony and practice racing for RS Tera World Challenge Trophy 2019. The day started with rigging, final preparation and measurement for the competing sailors before promptly making their way out onto the water for the 3pm practice race. A steady 8 knots of breeze greeted sailors from the West providing the ideal conditions for a shakedown sail and practice racing just a short commute from the event village.

Ljungskile, known as the town “where the mountains meet the sea”, made an impressive backdrop for the fleet as travelling teams made themselves familiar with the Swedish waters during the afternoon session. Despite the beautifully distracting scenery, the loud sound of the starting pistol certainly refocused the attention of the sailors from the stunning environment back to the racing. First up was the RS Tera Pro fleet, going into sequence for their outer loop course right on time.

The first beat saw many sailors heading left to take advantage of the lifts in the latter half of the leg, this paid in dividends for Teddy Dunn, Max Steel and Alice Davies as they rounded the first mark in 1st, 2nd and 3rd respectively. The second beat saw a dramatic right-hand shift in the breeze catching a handful of sailors out, as they reached their way to the windward mark, one to watch out for throughout the week. The practice race taught a few sailors valuable lessons for the week ahead as there were a few navigational errors, mistakes they will be grateful don’t contribute to their total for the week. The fleet maintained a competitively compact formation for the race, promoting plenty of boat on boat interactions, including some excellent displays of sporting behaviour combined with the focused racing.

In the RS Tera Sport Class, a much bigger fleet of 50 boats, saw a very competitive burst from the line by both the British and Danish teams. First at mark 1 was Felix Stuart, closely followed by Matthew Raynor and William Bailey. A local advantage may also play a factor in the tactical battles within this event as a handful of Swedish sailors crept up the fleet during racing.

After the practice race teams headed ashore in preparation for the opening parade and ceremony from Ljungskile town centre to the sailing club. Fully supporting the event, locals from the town of Ljungskile joined the parade as it passed through the high street and on towards the event village, lead by the sound of the Swedish drum band.

With the event officially open and sailors excited for the week ahead, the competitors have some excellent conditions to look forward to in this stunning venue. Stay tuned to the RS Tera Sailing Facebook page and the RS Tera International Class Association website for updates throughout the week.

A terrifically fun week of racing awaits this group of international junior athletes, so don’t forget to like the RS Tera Sailing Facebook page to keep updated.