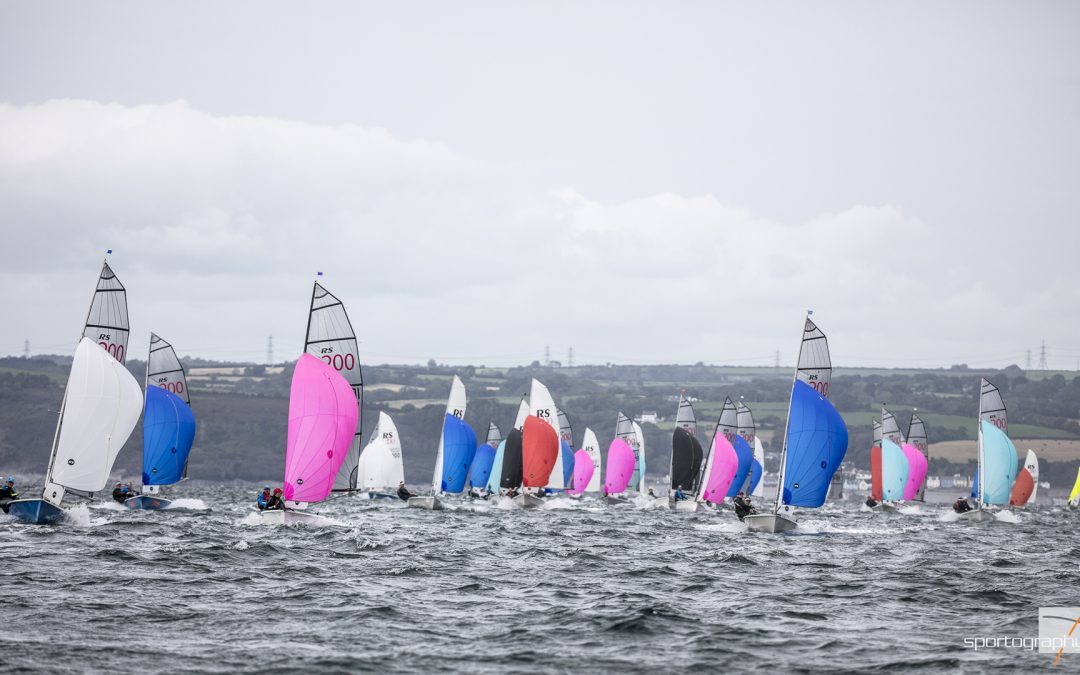 We have our new RS200 National Champions!

After a fabulous championship with close racing throughout the 100 boat fleet, we would like to congratulate our winners and thank

The usual gaggle of stalwarts, newbies, jewels of the British youth sailing scene and students descended on the stunning seaside town of Tenby for the 2017 RS200 Championships last week. The beauty of the venue and quality of competition meant that the entry limit of 100 boats was comfortably reached and the week was already looking to be a cracker.

Great sunshine in the seaside town of Tenby.  Sandcastles built, sunglasses required and many ice-creams consumed.

After a 1 hour postponement, giving those of the the fleet who had started the social with a bang on Sat night the time to recover and those with small people the opportunity to build giant sandcastles, the fleet headed out into a sunny but light wind bay.

Race 1- Johnny and Sarah McGovern were pathfinder and got the fleet away on the first start, with huge grins and great pace. Early out the gate looked good, with fabulous tide creating a travelator up the race course to the windward mark. Hamish Walker/Emma Clarke rounded in 1st, closely followed by Ben Palmer and Amy Seabright, Ross Thompson and James Scott in the red machine and Chay Taylor and Niamh. Downwind it was all to play for with snakes and ladders all over the place, especially at the leeward mark, where tide made it pretty tricky to get round the gate.  Ben and Amy had a storming run to take the lead, with Maria Stanley and Rob Henderson jumping into third, behind Hamish and Emma.

With decreasing breeze and a right shift, the fleet were being pushed to the windward mark making the last beat difficult to gain places but very easy to lose. Ben/Amy 1st, Stanley/Henderson 2nd and Hamish/Emma 3rd. 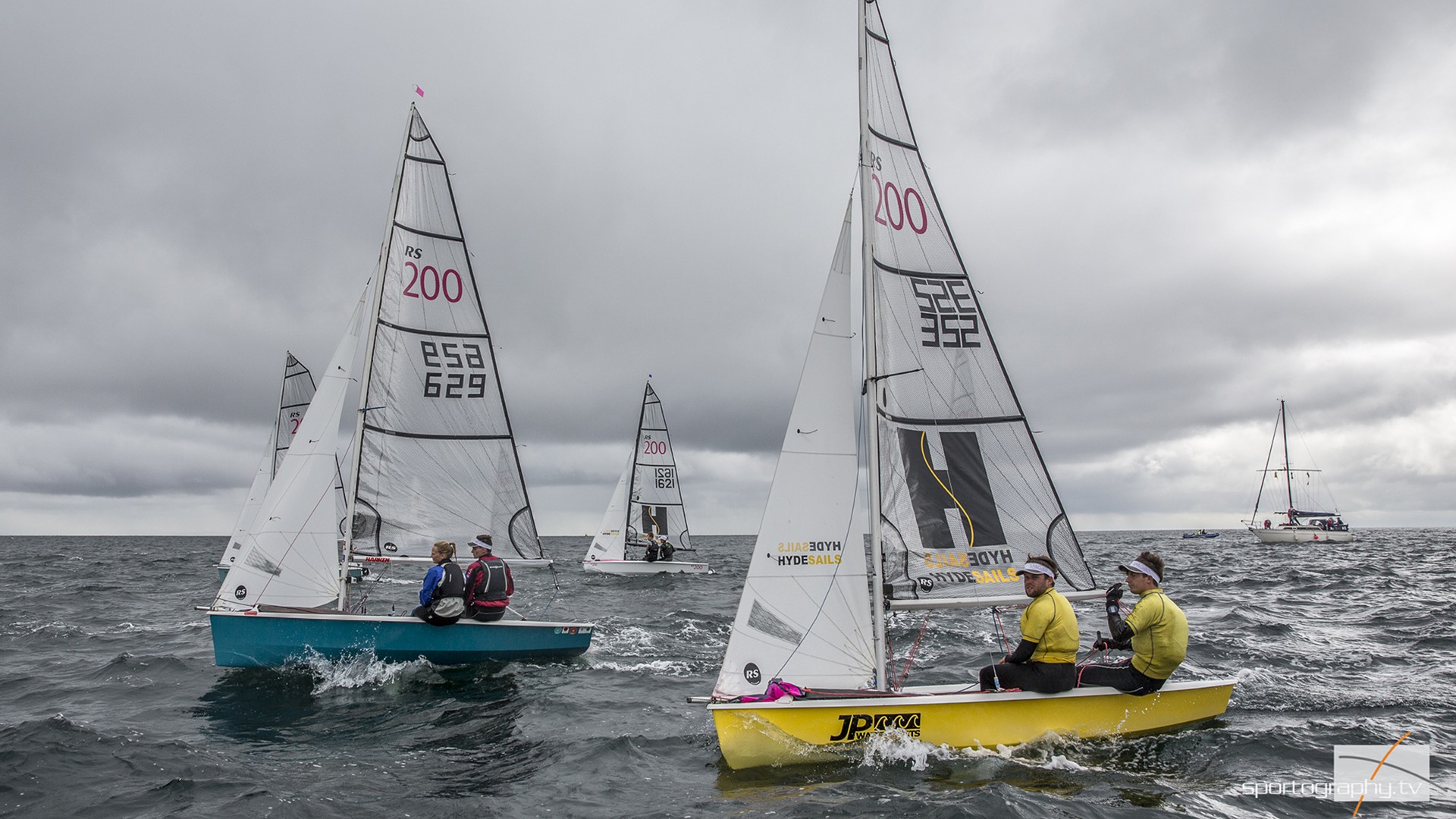 After a well-earned lie in the fleet was scheduled to start at 1300, so after many cups of tea, a rules seminar and some great boat chat led by the Henderson boys, the fleet launched once more into the fabulous Tenby bay.  More breeze, still lots of tide and hundreds of jellyfish was going to make for an interesting day.

Race 3. Maria Stanley and Rob Henderson were like a rocket ship out of the start, started early and a few minutes later with their ballistic speed were able to tack and cross the fleet.  They extended their lead for the rest of the race with Rob hiking far too hard upwind, making it look easy!  The rest of us mere mortals kept hiking and duly arrived at the windward mark as a rather large group.  Many a duck was required for those who came in on the port layline.  The fight for 2nd-10th was on! With many place changes both up and downwind, it all came down to the last gybes into the last leeward for 2nd -7th.  This saw Ben/Amy in 2nd and Arthur and Mary Henderson screaming in on the plane from the left to 3rd with the rest of us in aggressive soak mode .

Race 4.  Alistair Norris and Helen Summersgill smashed the gate start and we got away without incident. Jonny and Sarah McGovern destroyed the fleet with their upwind pace to lead into the windward mark closely followed by Ben and Amy. After the first run it was clear there were three major battles on.  1st and 2nd was nip and tuck between Ben/Amy and Johnny/Sarah.  3rd-10th was epically close, with yet again snakes and ladders to be had and it all to play for downwind, with every subtle low shift making the difference. The  battle for top 20 was all set to be the same, with groups of boats arriving at the windward together, showing what close boat speed the 200 fleet has and one small mistake can send you spiralling back down the results..

Ben and Amy managed to just hold off a rapid Jonny and Sarah, although there were some nervous moments for them when the spinnaker hoisted and the clew and tack were tangled together at the end of the pole. In the closely fought battle for 3rd to 10th, Maria and Rob smashed the right corner, some would say “rang the bell” to take third , just in front of Ed Whitehead and Millie Alcock and Alistair/Helen. .

After day 2 it was clear to see that the light wind practice and cocktails of Café Flambé (hence “The Flambé Bullets” consisting of Ben and Amy, Maria and Rob, Hamish and Emma) in the hot sunshine of Lake Como for the RS Eurocup had paid dividends as they locked out the top three on the scoreboard. It is well worth a trip to Carnac next year – for sunshine, excellent racing and of course some cheeky Nationals practice on holiday!

After what turned into a big night for some last night (Tom McLean/Tommy Darling/Syd McLean et al) where karaoke followed from Julian’s questionably intellectual quiz,  the sailors arrived early to the boat park for a three race day.

Race 5 was swiftly started with Caroline Croft/Alex Warren as the pathfinder and after one recall the race was underway in relatively light winds. It paid to bang hard left up the beat to make use of the shift. At the sailors’ request the first beat was made longer so those who chose the left were set up nicely for the race. Race 5 was won by Jonny and Sarah McGovern.

3 hours and 3 attempts later, the re-run of Race 2 was FINALLY underway! After plenty of bobbing about, the sailors were eager to get going. Young guns Henry Rastrick and Lucy Ferguson were pathfinders and special mentions must go to the team that managed to get their bowsprit through the A frame of the Gate RIB and Matt Whitfield who was OCS. Once the race was going the wind had filled in nicely and it was breeze on! The race officer set a great course which Jonny McGovern played the best to have a stellar lead, with many sailors overstanding on port and the tide equally catching many out, the windward mark roundings were made interesting but clean sailing was observed by the fleet. A tactical masterclass from the gurus Hamish Walker and Emma Clarke earned them the first of three bullets in a row.

Race 6 was turned around very quickly as it started to get later into the day and sailors were anxious to get ready for the night’s big social – Under the Sea fancy dress!! It paid to play the shifts and have good boat speed for this race which was shown by Hamish and Emma who won with it being shortened to two laps by the race officer who clearly took pity on the sailors.

We all know the arguably most important race is the race back to shore/showers/the bar so many sailors seemed to speed in to get their fishy costumes on ready for tonight’s social. 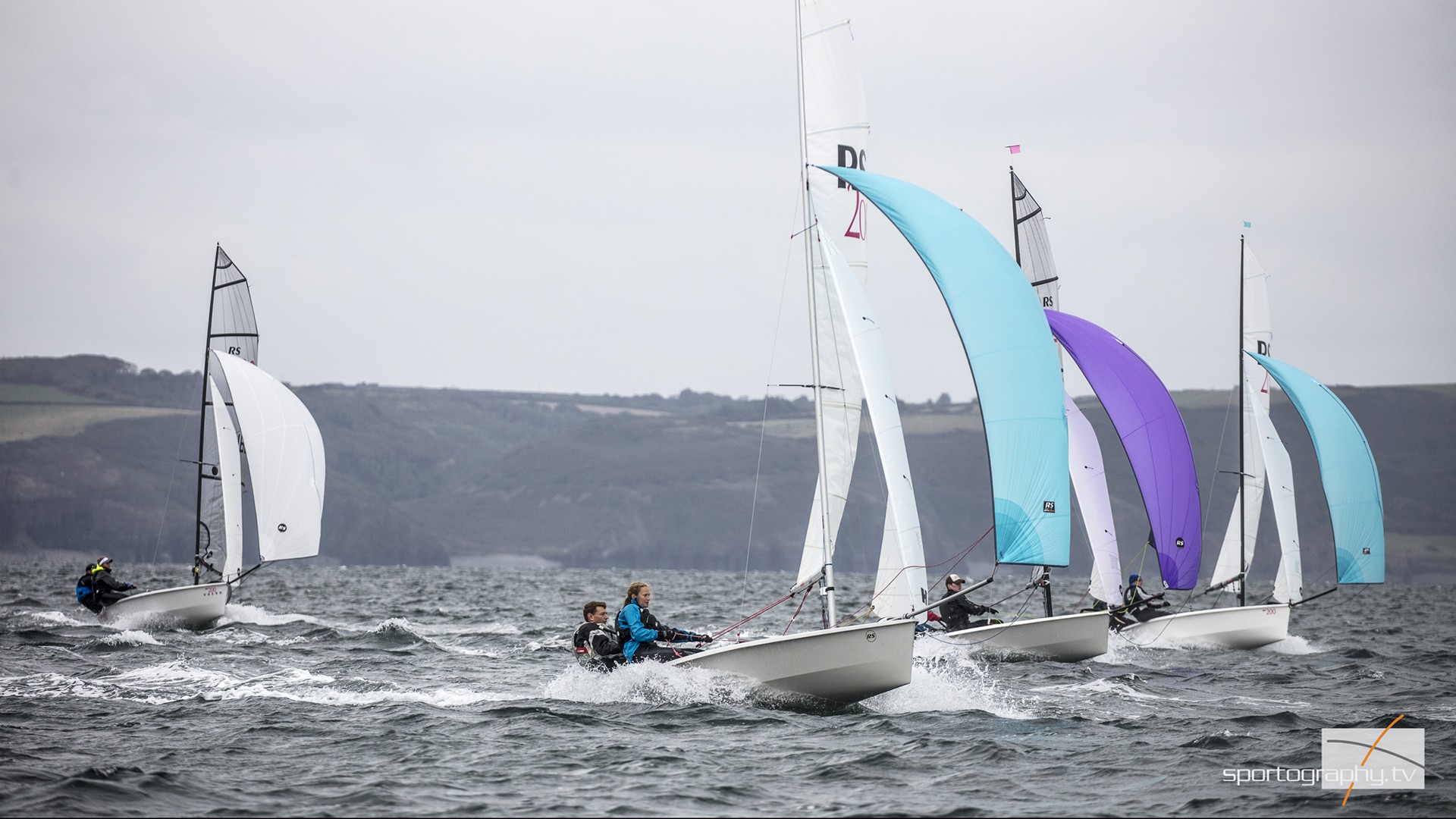 Race 7 saw Hamish and Emma correctly get to the right to lead from start to finish, while the yellow-bibbed Maria and Rob languished on the left. Other notable performances came from Edd Whitehead and Millie Alcock and Matt Reid and Becca Jones with both teams carrying good form towards the end of the regatta. Also raising some eyebrows was RS200 deity of Matt Mee and Emma Norris, clearly looking to put the McGovern team under some pressure for the Lovers Cup.

Race 8 saw Ben and Amy show the rest of the fleet how to execute a gate start and pick a shift to take the championship lead overnight. Tom and Lucy Hewitson sailed their socks off to help Hayling Island Sc’s bid for the club prize in 2nd, while Georgie and Dan Vickers knocked in a brilliant 3rd.

With just three points separating the top three, teams were itching to race out the championship on the final day however the weather was not playing ball. After three hours of waiting and five attempted starts in very shifty breeze, the fleet were sent back across the stunning Carmarthen Bay to congratulate their new champions, Ben Palmer and Amy Seabright, and reflect on what was another gem of a championship.

Ben and Amy are deserved and popular champions. Ben has sailed 200s for a few years now and fused this experience with Amy’s considerable pedigree on the Olympic pathway to unstoppable effect.

Thanks go to our tireless secretary Sally Campbell and to Tenby SC. The author has attended three championships at Tenby and has been staggered by the manner in which the club tackles the task every time. From the help with trolleying on the beach and the bar, to the boat park logistics to the accuracy of the race team, one cannot help but look forward to returning.

Results can be found here!